2010, The Year of Traveling Dangerously (Storms in California) 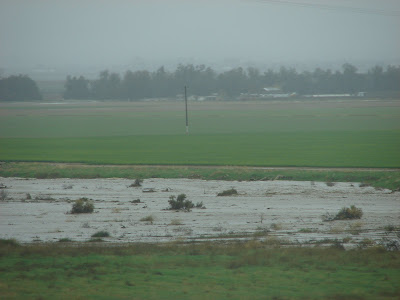 Water in California is always a proposition of too much or too little, and sometimes those problems occur at the same time (the north-south dichotomy is striking sometimes). This week we are experiencing the biggest series of storms in five years, and some localities in the Los Angeles region have received 12 inches or more, and the storms are continuing this evening.

I had occasion to tour a large swath of California yesterday, through the southern San Joaquin Valley, over the southernmost Sierra Nevada at Tehachapi, and across the Mojave Desert to the Colorado River near Needles. On the 500 mile journey, the rain did not stop. I did not see the most intense problems (apparently the entire town of McFarland was evacuated, for instance), but I saw plenty of water where I've never seen water before. I have been over Tehachapi Pass perhaps 80 times in the last 20 years, and I have never seen water in the channel of Caliente Creek where it flows into the Central Valley near Bakersfield. That's it above... 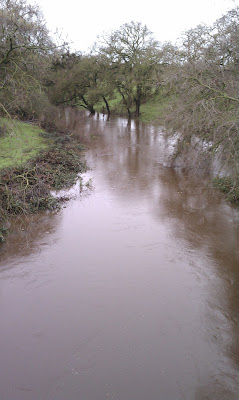 Dry Creek near Modesto is actually rarely dry because of irrigation runoff, but it also rarely looks like a river. I've seen it worse, but then the Modesto area was one of the areas least affected by the current storms. 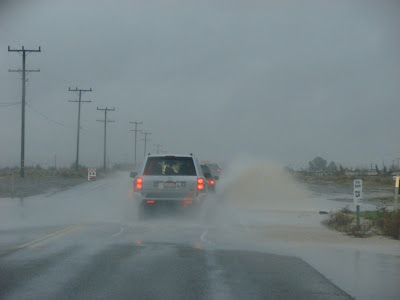 The desert was simply soaked. The western Mojave Desert has an internal drainage system (doesn't flow to the ocean) and is exceedingly flat. The ground was already saturated by the time we came through, and water was ponding everywhere, including our highway near Barstow. Greenery was already showing through, and the additional moisture means there is potential for a spectacular wildflower display in another month or two. I have my fingers crossed for our Death Valley trip in February!
Some pretty serious problems cropped up in western national parks. Road damage closed Sequoia National Park in California, and Zion National Park in Utah (Zion may not reopen until January). The normal flow of the Virgin River in Zion is 40-50 cubic feet per second; today it reached 5,000 cfs in the morning and was continuing to rise.

Thanks to Susan for the first and third pictures!
Posted by Garry Hayes at 5:47 PM

All that water energy is exciting, but also scary. Hmmmm.... Wildflowers in Death Valley. In Feb?

The usual best time is in March and April, but when storms arrive early in the fall, we get some nice displays in February. They are spectacular about one year in ten, seems to me.