Theropods in the Backyard: Dinosaurian Drama on my Porch

Apologies to Harper Lee, but if she had come to have known the mockingbird in my backyard, she would have called her classic story "To Kill a Yellow Finch". Or, she would have written a totally different story under the original name, a horror novel that Alfred Hitchcock would have been comfortable making a movie from. 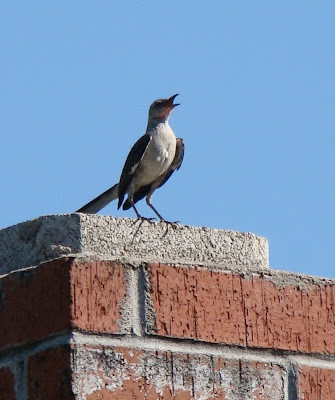 I don't want to make light of Lee's novel. I watched the movie "To Kill a Mockingbird" the other night, and was reminded again of its great emotional impact. In this day when bigots are once again feeling free to spew their hatred on the right-wing airwaves, it was a reminder of what a fragile thing justice and equality is in our society, and how easily we could lose it.

On the other hand, that mockingbird in our backyard is more reminiscent of the velociraptors in "Jurassic Park". No hauntingly lyrical song from this one; it's a screech that would put cold fear into anything small enough to be hunted. It has a bravado that has to be seen to be believed. It's attacked our cats, our dog, my wife, and my son. I think I'm the only one big enough to make it think twice. 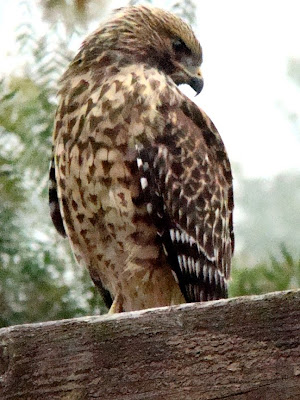 On the other hand, there's the T-rex or Allosaur of today's dinosaurian world, the hawk. This juvenile Redtail (?) was hanging out in my mom's backyard these last few weeks. It still begs for food from momma, just like any teenager, but is getting better and better at flying, and soon will be striking fear into the local rodent population, just as its ancestors have been doing for 200 million years.
Posted by Garry Hayes at 5:29 PM