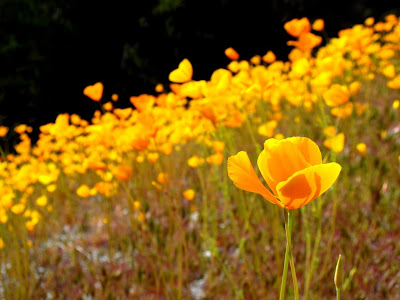 California's state flower, the Golden Poppy, grows on serpentine soils at Hells Hollow on Highway 49 in California's Mother Lode. Few plants can tolerate the chemical conditions in these soils, so many endemic plants grow there and nowhere else (the poppy is an obvious exception; it is classed as serpentine-tolerant plant, but grows in many environments). This brings us to the other side of the coin. In seeking to remove serpentine as the state rock of California, supporters of the move condemn the rock as somehow evil because it contains a form of chrysotile asbestos at times. In my last post, I outlined the factual errors and inaccuracies that the bill would codify into law. If you have followed Geotripper for any length of time, you know that I prefer to talk about the wonders of geology, and I wish to do so now. There are many good reasons for keeping serpentine (or more properly serpentinite) as the state rock of California. I've gathered these items into a single fact sheet that could help legislators better understand the concerns of not only geologists, but also teachers, biologists, botanists, environmental scientists, mineral enthusiasts, and others who feel that Senate Bill 624 is a bad idea. Pop me a note if you want the word.doc.

Let the California State Assembly know this week if you want to keep our state rock. They may vote as soon as August 2. Calls are great. Letters on paper carry more weight than e-mails. Be cordial, we want to educate people who may not know a great deal about geology and biology!

• Serpentine, or more properly serpentinite, is a rock made up of as many as 20 different minerals. It is found in at least 42 of California’s 58 counties, and makes up a significant part of the Sierra Nevada Mother Lode, the Klamath Mountains, and the California Coast Ranges. It is a relatively common rock in California and rare in most other parts of the country.

• The rock is variable in color, ranging from deep jade-green to black or blue. It often displays polished surfaces due to its mode of emplacement along fault zones. The minerals making up serpentine are complex magnesium iron silicates with varying amounts of heavy metals such as chromium, mercury, nickel, and cobalt.

• Serpentinite is derived from the metamorphism (alteration by addition of heat and water) of peridotite and other ultramafic rocks from the Earth’s mantle. As such, serpentinite provides researchers a window into the deep crustal and mantle processes of the planet.

• Serpentinite is often brought to the Earth’s surface by forces related to subduction zones. Subduction occurs when oceanic crust containing ultramafic rock is driven beneath oceanic or continental crust where it is partially melted to form volcanic rock, like that seen in the Cascades volcanoes like Mt. Shasta; or plutonic rock like the granite seen in the Sierra Nevada, the Peninsular Ranges, or the Mojave Desert.

• Serpentinite and related ultramafic rocks have served as an ore for numerous valuable minerals, including chromite, mercury, magnesite, platinum, nickel, and cobalt. Many of these minerals are exceedingly rare, and most must be imported from foreign sources.

• Serpentine is used as a colorful ornamental stone, in sculpture, in carved jewelry, and in buildings. Jade is sometimes found in association with serpentine, and the world’s only source of California’s state gemstone benitoite is a serpentine deposit in the California Coast Ranges.

• Soils developed on serpentine are rich in heavy metals like chromium, nickel, and cobalt, and depleted in essential nutrients such as nitrogen, potassium, and phosphorus. As a result, plants growing in these soils are highly adapted, and about 10% of California’s endemic species are found in serpentine areas, even though the rock covers only about 1% of the land area of the state.

• Serpentines and related rocks are increasingly viewed as a possible repository for sequestering carbon dioxide (CO2), because these rocks can chemically combine to fix the CO2 in the solid mineral magnesite (magnesium carbonate). Serpentine may thus play an important role in global efforts to control greenhouse emissions and climate change.

• Serpentine was chosen as the state rock of in part to promote a growing asbestos mining industry and to promote serpentine’s use as ornamental stone, but the law itself does not mention these things, and asbestos has not been mined in the state since 2002. The original promoters of serpentine had little knowledge of the educational value of the rock they chose as a state symbol.

For more information about California’s state rock, check out:
http://www.consrv.ca.gov/CGS/information/publications/cgs_notes/note_14/note_14.pdf