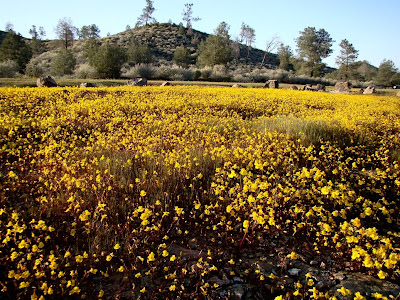 Serpentinite (the rock composed of serpentine) is many things to many people. To geologists it is a clue to understanding the deep interior of the Earth, and evidence of complex chemical interactions at depth and at the earth's surface. A wide variety of minerals are associated with serpentine, including the ore minerals of chromite, cinnabar (mercury), magnesite, platinum, nickel, and yes, chrysotile asbestos. To the biologist, serpentine soils represent a unique environment that has given rise to dozens of endemic species found nowhere else on earth. It has become controversial because of a bill in the California legislature to end its status as the state rock (Senate Bill 624). I've covered the reasons and the arguments elsewhere, and in the face of a well-funded drive for the bill from vested interests, and indifference from members of the state Assembly, I have only the platform of the geoblogosphere to make a difference. This week and for the foreseeable future, expect to see pictures of this unique feature of California geology. I'm following the lead of WestCenter and others on the geotwitter feed #CAserpentine.

Today's picture is a field of monkeyflowers in the Red Hills Reserve near the Mother Lode town of Chinese Camp. It was early spring and grass was growing everywhere else, but not on the serpentine.

Garry, it's too bad you politicians are such geo idiots. Serpentine is a wonderful rock to represent CA. I love the unique plants that grow on it, especially the Darlingtonia. Good luck with this fight.