The Other California: The CA State Mineral Museum - this is art, darnit! 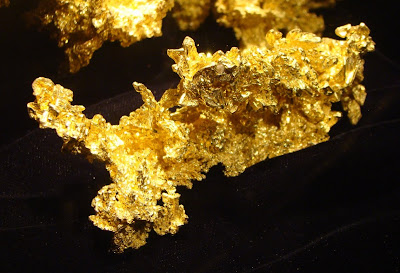 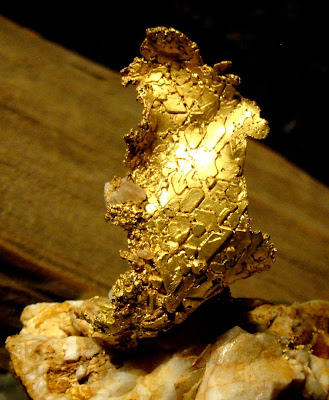 And what a great museum it is! One would think that the official state mineral collection would be housed in the state capitol somewhere, or in San Francisco or Los Angeles. The collection actually was in San Francisco for many years, surviving the 1906 earthquake, but in 1983 the collection was moved to Mariposa in the Sierra Nevada Mother Lode, where it resides in the California State Mining and Mineral Museum, a unit of the state park system. The choice of Mariposa makes a certain amount of historical sense, as the town hosted one of the very first hardrock mines and mills during the Gold Rush, the Mariposa, discovered by Kit Carson and ultimately owned by John C. Fremont, two of the big players in early state history.

One of the premier attractions of the collection is the Fricot nugget (that's a part of it at the top of the page), the largest single remaining nugget from the Gold Rush days, at 13.8 pounds. It sits in a vault within a vault. Most large nuggets were simply melted down (there is a larger nugget at the Ironstone Winery, but it was found in the 1990's at the Harvard Mine). There is a facsimile of the biggest nugget ever found, which originally weighed in at around 200 pounds.

The other smaller gold sample shown above is extraordinary as it shows the crystalline nature of the metal. The mineral forms octahedral crystals, but they aren't seen often because the malleable metal gets pounded into the more familiar nugget shape while being rolled in a stream. Samples like this one have to come from the quartz veins in mines. 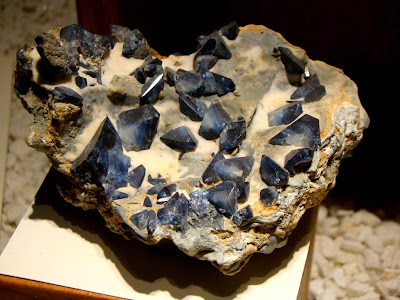 The museum has a spectacular collection of other minerals, including some of the best specimens of our state gemstone benitoite. This exceedingly rare sapphire-like crystal is found at a single locality in the world, a serpentine outcrop in the Coast Ranges of San Benito County. 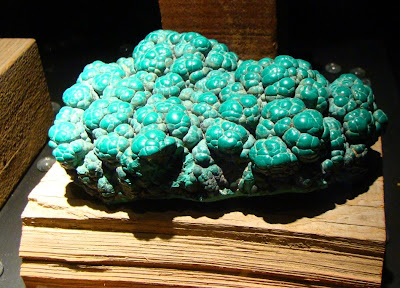 The museum has a host of other minerals on display, like the malachite sample above, and the aquamarine sample below. There are some excellent interpretive exhibits regarding the history and current state of mining in California, and even a 175 foot long tunnel that recreates a gold mine. 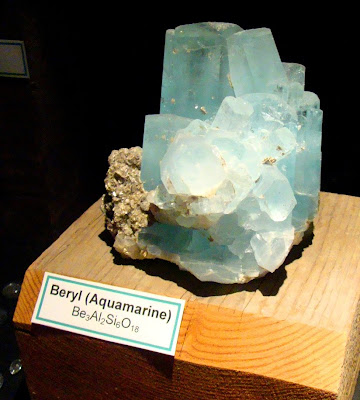 Admission is $4.00, but they offer discounts for school field trips (call in advance). The staff and volunteers are knowledgeable and helpful. The museum is located on Highway 49 just south of the town of Mariposa at the county fairgrounds. Unfortunately, the museum has been one of the pawns in the state budget wars, and has been threatened with closure off and on. It could use some friends in the capitol...
The Other California is part of my continuing explorations of the California that you don't always find on the postcards.
Posted by Garry Hayes at 11:21 AM

LOVE the Mining and Mineral Museum. Very kind folks, and I had a blast photographing the specimens there, including the Fricot Nugget. I was wondering if you'd ever been there yourself, recently and meant to recommend it to you.

I'll take one of each. Especially like that second gold sample showing the octahedral crystals.