Ten Overrated Places to See Before You Die...Part Two

The sacred cows must be slain...we continue an exploration of the overrated places to see before you die. Let's get right to it:

6. The Grand Canyon (the South Rim):
I can hear the howls already. How can I, a blogger who spent literally months extolling the wonders of the Grand Canyon and other parts of the Colorado Plateau put the incredible gorge on a list of overrated places? Well, there's a subtle distinction here: I define it as the rim. If you take a tour of the canyon, say with a bus company, or heavens forbid, a geology class, you could conceivably end up driving from one road pullout to another. Amidst the diesel fumes and crowds of tourists, you walk the short distance to the rim, snap a series of wonderfully well-planned and executed digital photos and video panoramas, get back in the vehicle and go to the next overlook, and think to yourself "I took this picture and this video at the last overlook". Yeah, it's colorful and all, and looks pretty deep, but after about four of those stops, you are starting to think about the coffee at Bright Angel Lodge. 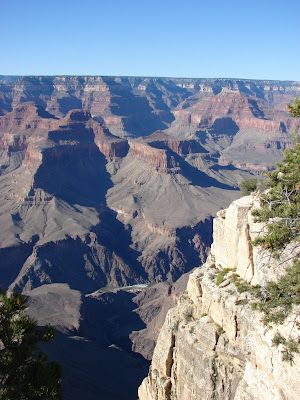 Need more evidence? Think about what happens when you offer to show your pictures to your friends? The hemming and hawing...

What's the problem? We are so geared to looking at scenery in only two dimensions, such as on a television or computer monitor, that we end up being isolated from the full width and depth of the canyon. We have no perspective (as I put it in a previous post, "The vastness of the scene has been shrunk to a single image in the back of my eye, and my ego makes me much larger in relation to the canyon in front of me"). We are spectators set apart from the geography, and have no sense of scale with which to compare the panorama we gaze at. Truth be told, the Spaniards who "discovered" the canyon in the 1500's had the same problem: they thought the gorge only a few thousand feet deep, and the Colorado River only six feet across.

How to solve this problem and turn the Grand Canyon into the stunning place it actually is? One thing you can do is what the Spaniards did: try climbing in. It took almost no time for them to realize they were in a truly huge hole, an unprecedented gash cut through the earth's crust. It doesn't take much, a few hundred yards, maybe to base of the Kaibab Limestone. When you've walked through one layer, you start to appreciate that there are many such layers in the canyon, and your mind will start to provide the scale you need. 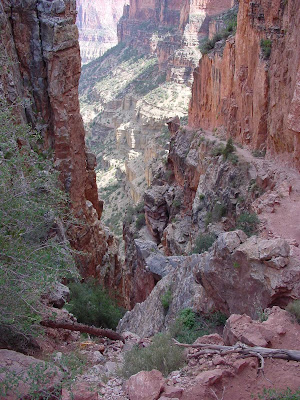 One other trick is to escape the tour mentality; escape from the crowds (it is possible: walk a rim trail, or even better, head for the North Rim, an utterly different experience). Spend time, and watch the canyon change moods over the course of a day. Walk out at night, especially a moonlit night.

And finally, learn the story of the layers. If you do this, you will won't see a two-dimensional color pallet, you will be reading a novel of the Earth. It's a fascinating story.
I said "ten" didn't I? Yeah, there are ten, but this took longer than I thought. More soon!
Posted by Garry Hayes at 9:40 PM

Oh Garry, you are so right about the experience most visitors get to the Grand Canyon, especially the South Rim. Going into the canyon, even a little ways down, is such a fulfilling experience. And, of course a lot of work. Yet the North Rim really gives a better sense of what the gorge is all about. And, attending a Ranger geology talk will certainly help put those layers in perspective. Great plug. So when can I expect to see you here?

I have hiked twice to Indian Garden and rafted through the canyon. You are right, the only way to truely experience the canyon is to get into it.

I agree it's great to be able to get into the canyon - even a relatively short distance, by hiking. Rafting and then hiking up side canyons is an excellent experience, or was in the '80s.

The North Rim is superior to the south rim. I still would recommend stopping at the South Rim to any passing travelers who haven't ever stopped before. But if anyone has the time (take the time!) the North Rim is exceptional.

I understand your comment regarding the difficulty of comprehending the scale of the canyon and yes, the only real way to get a handle on that is to get up close and walk/raft through it. But, to call the South Rim Experience overrated is bordering on the blasphemous! As a visitor from UK 2 years ago, I must say that it was a life changing experience that leaves me desperate for more! I think it is impossible to 'overrate' something as staggering as Grand Canyon South Rim!

Thanks for the comment Alyn. I'm actually trying to be a bit of a heretic here with these posts. I love the Grand Canyon and visit as often as I can. You'll notice my intent with this post and others that are coming is to get people to explore deeper on their visit. So many people never get to go, and so many people are content with a few moments and a few pictures. The Grand Canyon is so much more than a bit of scenery! It truly can be life-changing as you say.