California's Unique Serpentinite Landscapes 5: Doing What I Like to Do, and An Invitation! 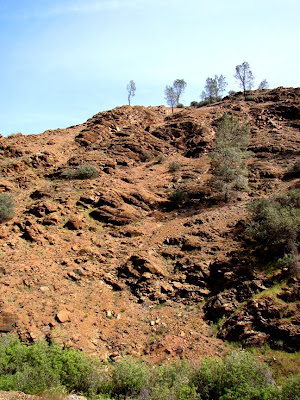 Two of the strangest days in my life happened this week, awoke one morning to find the serpentine story on the AP wires all across the country, and awoke again on another day to find my hand in a picture on the cover of the San Francisco Chronicle. Geologists, ecologists, and biologists wanted a part in the discussion on whether to remove serpentine as the state rock, and I hope we have a place now. There is a serious need to engage and find a common ground that educates people about the scientific uniqueness of serpentine and the role it plays in California's history, geology and biology. And in public health. But that discussion can't happen if there are political ploys or even a whiff of hidden agendas, and that is what is wrong with the present bill.

To say that being involved in a political firestorm is unfamiliar ground for me is a huge understatement. Like almost every geologist I know, I would rather be on the road with my field class, pounding rocks. That didn't happen this summer because of the state budget crisis, of course. But some great things did happen in the last two days, two quick trips that reminded me of why I love doing what I do. I took a photographer for the Chronicle and a public radio reporter on a geologic tour to the center of the earth. In a manner of speaking, anyway. We drove up Del Puerto Canyon in the Coast Ranges, and quite literally drove through the muds on the ocean floor, through the oceanic crust and into the Earth's mantle. More properly, the mantle had been pushed up, and we drove up the canyon to see what it looks like.

On the way up the canyon, we passed 20,000 feet of layered sedimentary rocks, passed the dig site where California's first dinosaur was discovered, looked at landslides, old mines, and took a close look at California's state rock. It was quiet up there, there was a slight breeze, and it was hot as hell. But it felt good being a teacher.

I know what lung cancer is like. It is a horrific disease, it is a horrible way to die, and it touched my family personally. I want to honor and remember the victims of asbestos-related diseases. But the bill before the state assembly is not the way to do it.

I think there is a better way, and one that educates people, especially our children about the uniqueness of this strange rock that is found across our state. Sure, it has asbestos in it sometimes. It also sometimes contains ores of mercury. And chromium. And magnesite. And it carries a history within it of moving continents, vast ocean basins, and secrets from deep in the earth's interior.

I have no idea if anyone from State Senator Gloria Romero's office has ever read or even knows about my blog (funny thing, in all the papers around the country, but the same number of visitors to the blog!), but I would like to extend an unusual invitation to you, Senator, or any other legislator. Join me, and some biologists, and historians, and let's go to Del Puerto, or one of the other places where serpentinite can be seen. Let's talk about why it is important to the state of California.
Posted by Garry Hayes at 11:30 PM

Nice job Garry. Keep it up.

That radio reporter is a friend of mine! She was just today telling me about the journey into the center of the earth. She had a great time. I also rode my bike up Del Puerto Canyon this past spring and was really blown away by the geology that I saw while doing the ride. Small world.

Del Puerto is such a fascinating place! And spring is a great time up there with all the flowers. Three of California's features: CA poppies, quail, and serpentine. Anyone know some others?