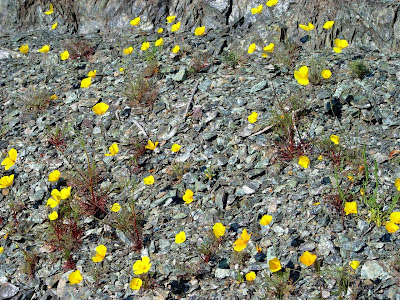 A new picture of California's serpentinite landscapes. Today's picture includes some springtime poppies on an outcrop of the state rock at Devils Hollow on Highway 49 north of Mariposa.

I complained the other day about how difficult it is to catch anyone's attention in Sacramento, especially if one is not part of a business with PR people and paid lobbyists. I don't have a public relations manager, but those of us concerned about this very strange legal action to strip serpentine of its status as the state rock do have one tool: education.

I've worked with Jon Christensen, Executive Director of the Bill Lane Center for the American West at Stanford University to produce a press release that discusses the educational aspects of serpentine, and the uniqueness of the rock in regards to the landscape of California. The text follows:

Campaign to Save Our State Rock Erupts on Twitter

California’s state rock — serpentine — is at the center of a growing controversy that erupted among geologists on Twitter and is now spreading to the capitol. A bill quietly passed the state Senate in May to strip serpentine of its status, and will be voted on by the Assembly in early August. While a few commentators tweaked the Legislature for worrying about the status of a rock when the state faces more pressing problems, the bill was hardly controversial until geologists leapt to the state rock’s defense on Twitter.

“Rarely has so much attention been paid to a rock.,” says Garry Hayes, a professor of geology at Modesto Junior College, who has been at the center of the “geoblogosphere” of concerned geologists. “This is a teachable moment.” Hayes is the former president of the National Association of Geoscience Teachers’ Far Western Section. Hayes opposes the move to strip serpentine of its honor. But he acknowledges the concerns of advocates who claim that asbestos fibers found in some forms of serpentine can be hazardous.

Serpentine was named the state rock in 1965. A bill to strip serpentine of its status, SB624, was introduced by state Senator Gloria Romero, who represents East Los Angeles, last year. The bill slipped under the radar of serpentine aficionados because it initially referred to anaerobic digestion, commonly known as composting. But Romero amended the bill after it passed the Senate in May, changing the language to strip serpentine of its status as the state rock.

It was then that word of the move slowly began to spread on social networks. In early July, a conversation erupted on Twitter when Jon Christensen, an environmental historian who is writing a book about serpentine, asked if anyone was organizing to try to save its status as the state rock. “Serpentine has an incredibly deep, rich history in California,” says Christensen, executive director of the Bill Lane Center for the American West at Stanford University. “It is connected to the Gold Rush, earthquakes, plate tectonics, and habitat for California’s iconic spring wildflower displays, as well as endangered species.”

Since then a vigorous debate has erupted online, on blogs, in comments on web sites, and on Twitter, where defenders of serpentine have used the hashtag #CAserpentine to rally support for the state rock and inform the public debate.

Background information on serpentine is available on Garry Hayes’ blog: http://geotripper.blogspot.com/.
The history of SB624 is available at http://www.sen.ca.gov/~newsen/senate.htm.
A good summary of serpentine with links to news and the debate can be found here: http://highway8a.blogspot.com/2010/07/serpentine-group-of-minerals.html.

So...the issue is growing, and hopefully some people will start paying a bit more to seemingly innocuous pieces of legislation. There are other issues at stake in this matter (here is another press release from a legal organization), but the legal issues are beyond my expertise. But underhanded political ploys...they bother me. A lot. Words count. And so does education.
Posted by Garry Hayes at 3:18 PM

Just have to point out that it would have been ironic if Romero -- here shown demonstrating that a (very) little learning is a dangerous thing -- had been elected California state Superintendent of Education in June. Romero was the candidate of public-school haters, teacher-bashers, billionaire privatizers and profiteers, just to give a succinct view. She was defeated by two pro-public-school candidates who split the vote and face a runoff.

All those serpentinophiles who celebrate this rock.....come join us to discuss 'real' science behind serpentine at the next international conference on serpentine ecology in Portugal June 2011

Yes, I agree, we need join hands and start a petition to put a stop to this craziness.