The Other California: Baymouth Bars - It's 5 O'clock Somewhere? 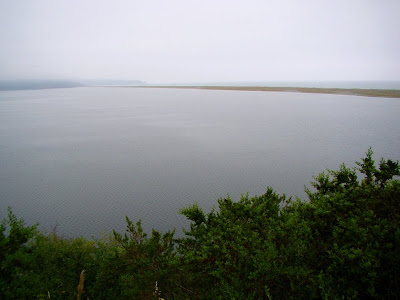 It's Friday, the end a long week! I'm home from a four day exploration of the California's North Coast country, and it was...uh...academically stimulating? Uh, a teacher's exploration dream? Er...a wonderful excuse to escape the heat in California's Central Valley? Yeah, that's it. We have to be honest here. But that doesn't mean I wasn't paying attention.

I haven't been up in the Crescent City - Eureka area all that much, and I am delighted to discover something new every time we pass through the region. Today I am offering pictures of some of the finest baymouth bars I've seen in California. Coming around a corner of Highway 101, one is struck by a line of sand so long and so straight that it almost seems artificial, but it most certainly is not. It is the baymouth bar enclosing Big Lagoon, a fresh-to-brackish body of water separated from the Pacific Ocean by a three-mile-long strip of sand that is no more than a few hundred feet wide. This lagoon and several others are protected in Humboldt Lagoons State Park. 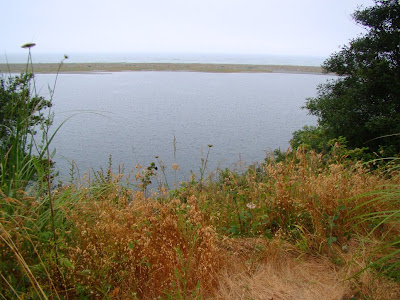 One might wonder how a strip of sand can survive the constant battering by the powerful waves that constantly rip away at the coast, but it is actually those very waves that bring out the creation of the bars. Waves expend the full brunt of their energy against headlands, but the energy is dissipated as waves enter into coves and harbors (which is, of course, why boats shelter in coves). Sand is carried along the beach by longshore transport, where waves wash up the beach front at an angle, but flow directly back into the water. When sand along an uneven coast encounters one of these bays, the loss of wave energy causes a spit (a long thin sandbar) to develop.

If there are no large rivers flowing into the bay, the spit will eventually reach all the way across the bay opening, forming the baymouth bar. The water behind these bars is fresh or brackish, and seeps out through the sand bar. It is only when there are flooding events or particularly violent waves that the bar is breached, and a portion of the lagoon pours into the sea. These are important ecological moments because the lagoon may have numerous salmon fingerlings and juveniles just waiting for a chance to get to the open sea. 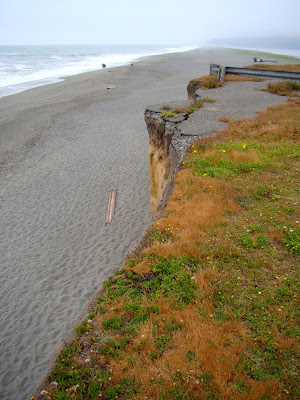 I was trying to find a spot to get a good shot of the Big Lagoon, and we discovered a nice little county park at the south end of the bar. County parks sometimes have less than altruistic reasons for existence, and I suspect that might be the case here. Yes, there is a wonderful long beach with tables and a small boat ramp and all, but you may notice there is also a paved road that quite literally dead-ends at the top of the seacliff. The fury of the waves in this part of California exacts a heavy toll on beachfront property, and I can't be sure, but there very well could have once been houses here. Cliff retreat has to be considered in landscape planning, and a nice beautiful park fits the bill when housing developments would probably fall into the sea.

Still, if you are a southern Californian or Floridian, it might seem strange to see a vast beach with barely a dozen beachgoers. True, it's not as sunny, but this is the way I like my beaches! 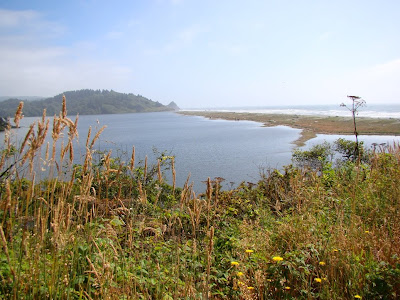 The picture above is Stone Lagoon, another of the lagoons in the state park. 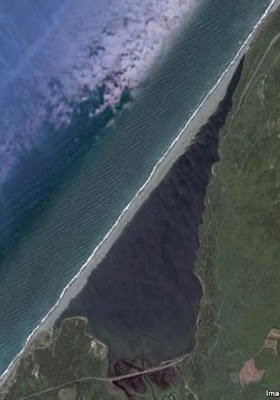 A Google Earth shot shows Big Lagoon from above, if you had trouble visualizing what a baymouth bar like.

The Other California is my continuing series of articles describing geologically interesting places in our wonderful state that somehow miss showing up on the postcards. Check them out!
Posted by Garry Hayes at 6:25 PM

I love this area of the northern coast. Last time there I remember seeing sections of Hwy 1 that had crumbled into the seas. Welcome back.

It was interesting to see the county park in your blog, we actually stayed there summer before last. Beautiful country and a nice campground.