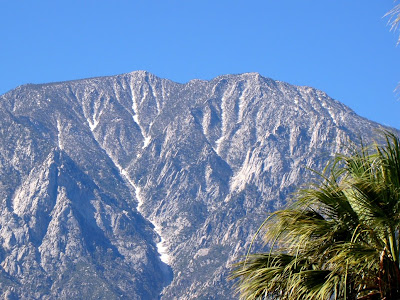 My previous post included a mystery picture of a dome in California, and those who went out on a limb and guessed at the location gave some excellent possible answers: Yosemite, Hetch Hetchy, other Sierra Nevada sites, and Castle Crags up in the Klamath Mountains. But...there is another granitic mountain range in California that reaches elevations in excess of 10,000 feet, and includes some alpine forest environments, incredible views, wonderful backpacking trails, and some excellent technical rock climbing. The dome in the last post is Lily Rock, a rather large outcropping of granitic rock that rises over the mountain town of Idylwild in the San Jacinto Mountains at the extreme north end of the Peninsular Ranges of California.

The Peninsular Range of California extends from San Gorgonio Pass on the north to the very southern tip of Baja California in Mexico. There is no peninsula as such in Alta California, but in a few hundred thousand years there will be one, as the adjacent Salton Trough continues to open up, allowing the Gulf of California to expand northward.

San Jacinto Peak (10,834 feet) is the highest point in the entire range, and rises in spectacular fashion from San Gorgonio Pass, with relief approaching two miles. Only Telescope Peak in Death Valley, or parts of the Sierra Nevada crest over the Owens Valley come anywhere close. 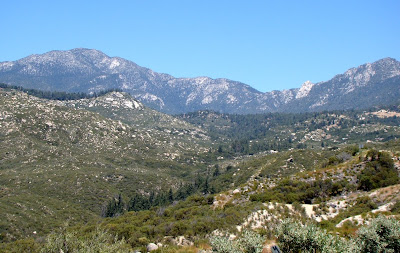 Lily Rock (sometimes Tahquitz Rock) is visible in the picture above, a little bit left of center. Local technical rock climbers know it well, honing their skills here when they can't get to the more famous cliffs of Yosemite. Tahquitz Peak rises to an elevation of 8,846 feet to the right of the dome. Marion Peak and other peaks on the high ridge of San Jacinto itself are visible on the left. A network of trails criss-cross the high plateau between the peaks, which is protected as San Jacinto State Park.

This was a mountain range of my youth. I spent many weekends in my teen years exploring as many corners of the wilderness as I could, and I loved it dearly. But when I visited Idylwild a few weeks ago, it was the first visit in perhaps 30 years. A few things have changed. Back then, the long ridge leading from San Jacinto to Santa Rosa Peak, about 30 miles to the south, was a largely unknown roadless area with hidden springs, pockets of incense cedar forest, and a few island forests of ponderosa and fir. In 2004, the entire range won protection as Santa Rosa and San Jacinto National Monument, administered jointly by (try to follow me here), the Bureau of Land Management, National Forest Service, the Agua Caliente Band of Cahuilla Indians, the California Department of Parks and Recreation, the California Department of Fish and Game, other agencies of the State of California, and private landowners. I'm glad the region has earned federal protection, but I'm not sure I would want to sit in on management meetings! 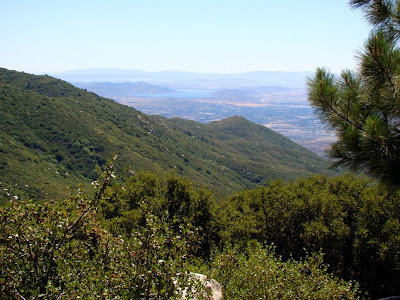 On clear days, the views from the San Jacinto Mountains are simply stunning. We had a clear day that allowed us to look down on Hemet and Perris Lake off to the west, with the Santa Ana Mountains in the far distance. This is some wonderful mountain country within a short distance of the huge population of Southern California. If you think you have to go to the Sierra to see alpine granite landscapes and splendid isolation, you don't necessarily have to go that far. Check it out!

The Other California is a blog series on the hidden geological gems of my wonderful state.

I've only seen Jacinto from afar.

The mountain is pretty awesome from up close! I've seen it a few times recently from the base, and from the summit too many decades ago.