600th Blogpost: Sunset in Crescent City, and the Spheres 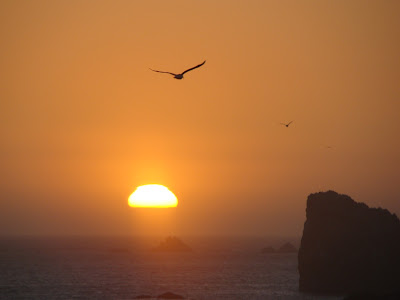 I noted the day I posted my hundredth blog, and might have said something about 200, but the others just didn't seem worth mention. Neither is this one really, but I did just happen to notice that it was post #600. It's kind of like the way you really notice mile 1,000 on a new car, but hitting 60,000 just means you need a tune-up. We do like our even numbers.

Nothing really significant tonight, but it has been a fascinating day which included a milestone: I finally completed my personal journey along Highway 1 along the coast of California. Over the years I've filled in the map with selected journeys that ultimately covered the entire extent of the incredible highway from Southern California to northernmost California, all except for one forty-mile stretch: Fort Bragg to Leggett. It was a beautiful stretch, and no doubt will appear soon as an "Other California" entry.

The day also included one of those odd moments that sometimes happen in life. I was parked at an overlook on Highway 1 snapping pictures of the stunning seacliffs. There were four motorcyclists there, also snapping photographs, and one of them walked over to me and said "Are you a geology teacher? From Modesto?". It turned out to be one of my students from a decade ago. At the other end of the parking lot his mom (the family that bikes together, stays together?) was recognizing my wife as a fellow teacher from a decade ago. Go figure...

Tonight's picture is a sunset at Crescent City in the far north of California. It was a beautiful clear evening, and as I glanced at the photo, I was struck by the intersection of the spheres that I always teach about: the lithosphere as exemplified by the rocky shoreline, the hydrosphere (the restless Pacific, an oxymoron if you think about it), the atmosphere, all combining to support the biosphere, represented here by the two flying dinosaurs. The energy source that drives the whole system was disappearing behind the distant fogbank. It has been a satisfying day.

So, sorry for a bit of ramble; it's the essence of blogging as I see it. I am collecting my thoughts on this month's Accretionary Wedge Carnival, hopefully to be posted soon. As blogpost #601 or some other random number
Posted by Garry Hayes at 12:52 AM

Congrats on your 600th post! I've totally lost count, especially now I'm spread across 3 blogging platforms, but I'm not sure I've managed much more than that....

And you've chosen a lovely photo to mark it with.

Good for you making to 600. I'm not too far behind. I love the Hwy 1 drive down the coast. Traveled it from WA to LA many years ago. May be time for a repeat soon.

I hope you have the opportunity to drive up 199 along the Smith River; the Josephine Ophiolite is beautifully exposed, and the sheeted dike complex is breathtaking! I taught in Brookings, just across the OR border.

I'd like to second the comment re: the Josephine Opiolite. It's a really nice series of exposures.
And nice picture!

You saw the best of Crescent City, I think.