Words That Have Meaning: False Alarm and Warning (A Tsunami Wrap-up) 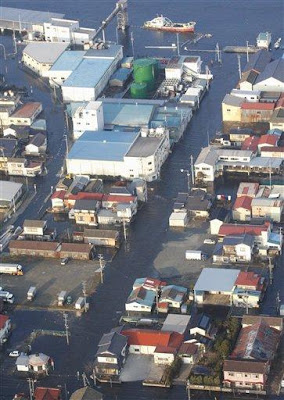 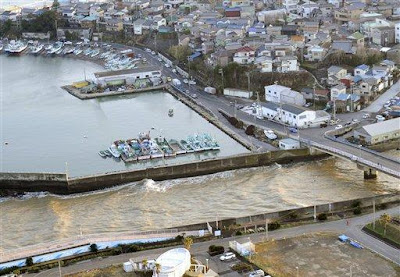 This was a false alarm? Photographs from CBS News and AP
Two situations:
In the first, it's a school day, and some kid pulls the fire alarm. Bells ring and students have to evacuate even though there is no evidence of a fire and everyone knows it was a prank. This is a false alarm.
In the second, a teller pushes the alarm button. There's a man demanding money. No one knows if the man is armed or not. The police evacuate the neighborhood, surround the bank, and ultimately arrest the man. If the man turns out to be unarmed, it makes the whole thing a false alarm, right? No? I don't think so either. The police and the people of the neighborhood were warned of a possible dangerous situation. There could have been a deadly shootout. Will anyone fault the police for doing their job?
So why are scientists being forced to defend themselves for their warnings about a tsunami? Just because the tsunami proved to have less violence than expected doesn't mean they should have acted any differently. The media bean-counters are probably sorry they didn't get the death and disaster in Hawaii and other Pacific Islands that would have driven up ratings (sorry for the cynicism), but the seismologists did nothing improper. And I was personally impressed that Hawaiians and others did such a fine job of responding. They know from experience what could have happened. And in the end, there was a tsunami that extended from Chile all the way to Japan where the pictures above were taken. There was a fine line between an interesting geologic event and a worldwide disaster. There is disaster enough in Chile, where the death toll continues to climb.

With that in mind, I'm glad to see the Pacific Tsunami Warning Center is not caving in to media accusations of a "false alarm":

"It's a key point to remember that we cannot under-warn. Failure to warn is not an option for us," said Dai Lin Wang, an oceanographer at the Pacific Tsunami Warning Center in Hawaii. "We cannot have a situation that we thought was no problem and then it's devastating. That just cannot happen."

The media should know better than to loosely toss the words "false alarm" in their wrap-up stories about the tsunami. Words have meaning, and "false alarm" sends the wrong message, a sort of "boy who cried wolf" attitude. Millions of people across the Pacific have now experienced an evacuation, and will know what to do the next time. Unless they think of the seismologists as boys crying wolf. These men and women take their jobs seriously, and will never play such games with the public.
Don't forget to donate to relief efforts in Chile, and in Haiti. It's so easy to forget a tragedy when another one crowds out the headlines.
UPDATE: Word starts creeping out about devastating tsunami damage in Chile
UPDATE #2: More people may have been killed in Chile by the tsunami than by the earthquake itself. Magma Cum Laude provides a nice example of good media coverage on the tsunami, with Dr. Chuck Bailey at William and Mary College. Nice catch!

Just to letcha know, Jon Stewart was all over the stupidity in his own inimitable way: