The Other California: A Journey to the Center of the Earth (kind of...) 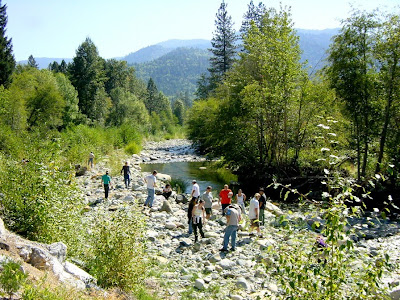 How many of you tried to dig a tunnel to China in the backyard when you were a kid? Given the soil conditions in the yard I grew up in, I'm probably lucky to be alive. I dug tunnels looking for buried treasures, gemstones, fossils and sometimes I was just curious what was down there. Geologists, I've found, are the kids who tried to find all those things, and never really grew up.

So how far do these overgrown kids get? It turns out that the deepest tunnels that humans have ever been able to dig reach depths of about 12,800 feet, a little over 2-1/2 miles. That might seem like a lot from our point of view, but the depth to the center of the Earth is around 4,000 miles. We've barely scratched the surface, yet the temperatures of the rock at these depths is well over 100 degrees, and the rocks are under so much pressure that explosions of rocks from the walls are a constant danger to the miners. Kids, there's got to be a better way to see what lies deep below. And there is, in the Other California, one of those places not found on the postcards. The adventure lies in the Klamath Mountains, and the most dangerous thing you have to face is slipping on a slick river rock, because geological processes have brought the rocks many miles up from the depths. You need only explore the rivers flowing off the mountains to see what the deep interior of the earth looks like.

The Klamath Mountains are a collection of bits and pieces of the earth's crust that have been carried great distances from their point of origin and slammed (at geologic speeds of inches per year) into the western edge of the North American continent. A huge variety of igneous and metamorphic rocks are found around the province, and some of the most interesting are those that once resided deep in the Earth's mantle, a layer that extends from just below the crust, from maybe 15 or 20 miles beneath our feet, to a depth of about 1,800 miles. Here are a couple of bits of the Earth's deep hidden places that I found on a short trip to the Eastern Klamath Terrane in the vicinity of Gazelle. 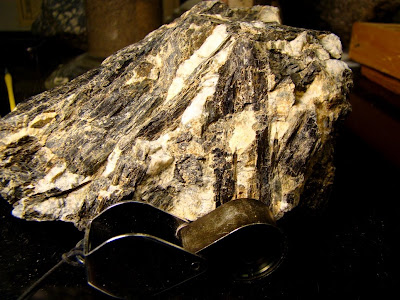 The oceanic crust is usually described as being made of basalt, but a few miles down in the crust the basaltic magma cools slowly to form a coarse-grained basaltic rock called gabbro. Sometimes, as can be seen above, the crystals that form are huge, with black hornblende and white feldspar crystals several inches long. Igneous rocks with such large crystals are called pegmatites. 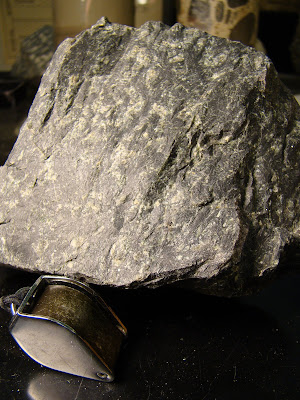 Going even "deeper" into the interior, we pass the Mohorovicic Discontinuity, the dividing line between the crust and mantle. The upper part of the mantle is composed of olivine-rich rocks like dunite or peridotite. Olivine is best known to most people as the green gemstone peridot. That's right, much of the Earth's interior is made up of gems! The rock in the picture above is dunite, in part slightly altered to serpentine. 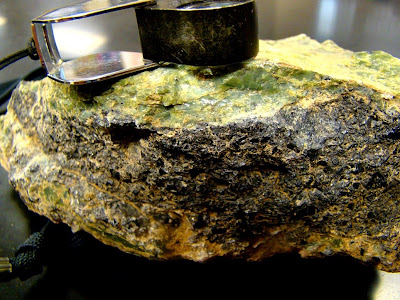 In many parts of the Klamath Mountains, the mantle rocks are completely altered to serpentine, the state rock of California. These ultramafic rocks are fairly rich in a number of unusual metal ores, including platinum, nickel, magnesium and mercury. One of the most important ores is chromite, which is the only significant source we have for chromium, the metal that puts the "stainless" in stainless steel. We import most of the chromium that we need from foreign sources, but in wartime (especially the two World Wars), the ores were mined domestically, and a number of operations were present in the Klamaths. The black semi-metallic crystals in the picture above are chromite, with green serpentine across the top.
In our next post we are going to "climb" into the underside of a volcano...
Posted by Garry Hayes at 12:15 AM

I could have sworn that the Kola borehole was still the deepest hole at a bit over 7.5 miles deep...?

The Kola is the deepest drill hole, but I was referring to the deepest mines we can walk through...