Geological Jealousy: Why don't I get to see this in California? 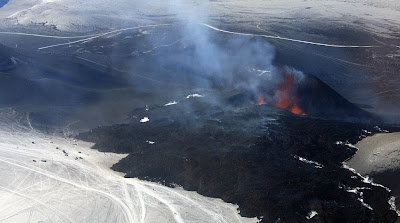 This spectacular image comes courtesy of Halldor Sigurdsson at Iceland banking crisis news and more, who has been providing some nice coverage of the ongoing eruption at Eyjafjallajokull (you may be sure that I didn't spell that from memory). More pictures and a nice aerial video can be found here. Note the cars parked at the edge of the lava flow. Yeah, I know most people run away from volcanic eruptions, but geologists and I guess Icelanders aren't most people! Erik at Eruptions has a nice rundown of recent activity.

Iceland is a volcanic wonderland, with the activity resulting from the country's location on the Mid-Atlantic Ridge (a divergent plate boundary), and possible location on top of a hot spot, perhaps similar to the one that underlies Hawaii. The precise nature of the conditions resulting in the volcanism is a concern of ongoing research.

So why can't we see this kind of thing in California? Well, actually we potentially could, but not for the same reasons. California does in part sit astride a divergent (or potentially divergent) boundary in a number of places. The Salton Sea and Imperial Valley area, for instance, sits in a deep trough caused by the rifting of Baja California. A few small volcanoes can be found near the lakeshore. The Basin and Range and Mojave Desert provinces in the eastern part of the state have also been rifted apart, and contain dozens of fairly recent cinder cones and lava flows. The northern Coast Ranges have a number of potentially active volcanoes in the Clear Lakes/Geysers region. And as I discussed in detail in the Other California series, the Cascades and Modoc Plateau provinces are both rich with recent volcanic activity due in part to the presence of the Cascadia subduction zone offshore to the west.

In short, our volcanoes don't erupt nearly as often as those in Iceland (39 times last century), but we do have lots of potential for future geological excitement. I would just love to see a modest eruption somewhere in the state, in one of remote spots anyway. Mt. Shasta and the Long Valley caldera are two places that I prefer would remain quiet...
Posted by Garry Hayes at 12:33 PM

Amen to that. I can get pretty excited discussing potential volcanism in Oregon. One example I've frequently used with kids when geotripping through central Oregon is Pilot Butte, a fairly young cinder cone in downtown Bend. What would be the warnings of an incipient eruption? What would be sensible precautionary steps to take while the eruption was still uncertain? After it started? How would you cope with people who wanted to salvage their belongings during lulls? What would be the larger ramifications for the city and state (at the intersection of US 20 and 97, this is an important crossroads)?

It all makes for an engaging and fascinating mind experiment. Then you realize how messy the reality would actually BE...

Again, remote would be cool. Up close and personal, not so much.

Seems like we should be due for a little basaltic eruption on one of the B&R faults in Nevada or eastern California somewhere. I don't want to wait another million years.

Though, yeah, it could be messy.

The problem with modest eruptions aren't the physical dangers, but all the tourists that would come crowding in and take up the best spots to watch.