Hope for Taz, and Natural Selection in Action 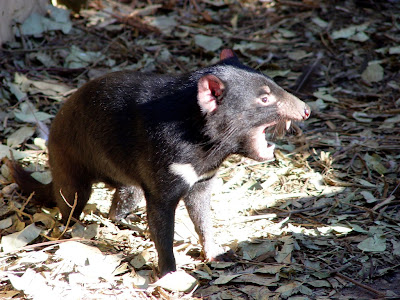 A form of cancer has been devastating wild populations of the Tasmanian Devil in their homeland on the island south of Australia. Devil Facial Tumor Disease is being spread among the creatures as they fight and scratch each other; the tumors cause horrific disfigurement of their faces, ultimately making eating impossible. Something like 70% of the Tasmanian Devil population has died out since the disease was discovered in 1996. Estimates were that the entire species could be wiped out within 25 years.

There have been recent news reports that a colony of the Taz has been found that is resistant to the cancer. This is wonderful news, and if it is correct there may be a future for the species. The Taz is a unique animal. I'm not sure I would use the word "cute" to describe them, but they are part of one of the world's most interesting ecosystems, and they have much to teach us about how evolution shapes the world. I wrote extensively about the marsupials in one of my earliest posts (The Long Strange Journey of the Marsupials), and I continue to be fascinated by paleontological research in the Australian region.

The story of the day tells us of a different aspect of how evolution works. A common misunderstanding of natural selection is that animals somehow change in response to changes in their environment. If it gets drier, animals somehow magically develop a way of surviving on less water. If the vegetation changes, the animals survive by changing in a way as to better digest the new leaf types. If drought leaves foliage out of reach, giraffes develop longer necks to reach the higher leaves. In other words, animals somehow change themselves in order to survive. Natural selection doesn't work this way at all, and this model, Lamarkian evolution, was discredited long ago.

What does happen is that natural variations exist within species: some are taller, some smaller, some are darker, some lighter, some have slightly thicker fur or longer feathers, and these variations result from the recombination of genes in the the reproductive process (you don't look exactly like your parents; you have aspects of both of them and are a unique variation of their genetic material). Sometimes these variations are introduced by mutations in the DNA sequence. When the environment changes, some individuals are better adapted to survive those new conditions. It is the animals that possess these variations in advance of the change that are the ones who survive. They tend to be the ones that are able to pass along their genes to future generations.

No one could have predicted the rise of Devils Facial Tumor Disease, least of all the animals themselves. But in a small subset of the species there was a genetic trait already in existence that recognized the tumor cells as foreign. Who knows why or how it developed? That part doesn't matter. What matters is that the variation exists. And now the species may survive, and the descendants of this colony will be the ones who are able to pass their genes on. It is a great example of natural selection and evolution in action. And I hope a positive future for one of my favorite animals.

Today's picture was taken at a wild animal park outside Sydney, Australia. The photo may have been featured in the movie Inconvenient Truth, though I haven't found it there yet (you can find my name in the movie credits, though!).
Posted by Garry Hayes at 3:50 PM