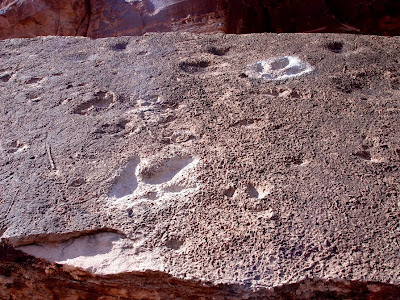 What Bryan at In Terra Veritas said (and he said it better, but read on if you wish!)...

What's going on? Another group of headlines on scientific topics/events and the media response that I've been complaining about in the last week: a tendency to overstate, overhype and overdo things. A week ago it was the Chile earthquake and resulting tsunami. This week is a perennial favorite topic of the media: what did in the dinosaurs?

An article in Science (abstract only, check your library for access to the whole article) titled The Chicxulub Asteroid Impact and Mass Extinction at the Cretaceous-Paleogene Boundary would seem to be attempting to put an end to the ongoing debate about what did in the dinosaurs 65.5 million years ago. I can't really speak to the merits of the paper, I haven't read it and I am not an expert in the area, but in my mind I immediately had questions.

The paper had 41 authors. Forty-one! I immediately wondered who they were. Were these 41 people the most prominent researchers on all sides (not "both" mind you, because there are not just two sides, but "all") of the decades-long debate? Was this the surrender of the opposition, and a final nail in the coffin of the hypothesis that an intense episode of volcanism in India caused the extinction? Was this a paper by the volcanism researchers agreeing that theirs was a failed hypothesis? Or were they all experts on the potential effects of asteroid impacts trying to present the final argument of the prosecution, presenting an overwhelmingly powerful case backed up by new evidence? I look forward to hearing from my paleontologist friends and colleagues. I'd like their take on this study.

My source of irritation is the response of the media. The headlines of the articles include phrases like "It's Official...", "Scientists Settle...", and "Mystery Solved!" that suggest that the matter is settled. I could be wrong, but I strongly suspect it is not. Bryan's take on the article strongly suggests that the debate is fated to continue. It's exceedingly rare for a single research article to be the final word on any debate in science. There are few of those "eureka" moments in science, but a great many bits of incremental advances of understanding brought about by newly emerging evidence. But for some reason, the media seems most often to miss the distinction.

I would be remiss if I didn't mention some of the media articles that do a better job of placing the report in proper context: Popular Science notes at the end of the article that the debate really is continuing, and the title ("According to New Comprehensive Review, a Giant Meteorite Caused the Dinosaur Extinction") is less sensationalistic. In the same way, an AP story also carries a more appropriate headline: "Researchers reassert that impact killed dinosaurs".

At least no one is going to die if the media gets the framing of the story wrong on this issue....

Today's picture focuses on some dinosaur tracks found near Moab, Utah, along the Colorado River.

UPDATE: Scientific American has a good review as well, but the subtitle would have made the better title ("remains the best explanation").
Posted by Garry Hayes at 8:28 PM

Since Keller is not on the paper, I would say that this is not the end...

This paper came out of a workshop, and the authors are the workshop attendees. I think they do a pretty good job of discrediting Keller et al.'s interpretation. Rarely do we ever reach 100% consensus on scientific issues. Just as today there are climate-change deniers and flat-earthers, there will probably always be a small number of folks who do not accept that the Chicxulub impact caused the K-P extinction.

Of course, science is not a democracy, and there are plenty of examples where folks in the minority viewpoint turn out to be right. But at least in the K-P extinction debate, the folks who favor impact have convincingly dealt with every criticism; in contrast the impact-criticizers have not proposed a convincing comprehensive alternate hypothesis that fits the data. Its the same problem with birds evolving from theropod dinosaurs. There is a mountain of evidence for it, yet a select group of vocal opponents gets disproportionate airtime (sound familiar? Oh yes, we're back to climate change again!).

The media's framing does leave something to be desired, but I don't think it is all wrong. "Fair and balanced" does not equate with quality journalism. Giving equal time to both sides of the debate is misleading when you have a few hold-outs that do not agree with scientific consensus that is backed up with mountains of data. The fact is that debate is not continuing in regards to the K-P extinction! What really is happening is that there is one small but vocal research group led by Keller that other folks have to respond to. But as discussed in the Science paper, their interpretations simply don't fit the available data.

How did 41 researches all agree on everything?