The Other California: Getting All Excited About Natural Disasters.... 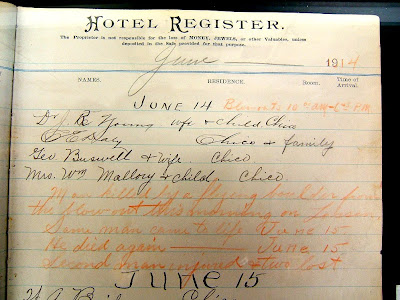 I was kind of hard on CNN, MSNBC, and Fox cable "news" for their overwrought coverage of the Chile earthquake and resulting tsunami a few weeks ago (and it was justified, too, the coverage was terrible). Just the same, it's easy for anyone to get overwrought in the face of intense geologic events.

A few weeks ago, I was discussing the geologic story of Lassen Volcanic National Park, which erupted in the years of 1914-17, the last time any volcano erupted within California. Not too surprisingly, the eruption generated a tremendous amount of interest in the state and across the country. Kurt was kind enough to send along a photo of a page from the register of a hotel in Chester, which lies just a few miles from the national park. It provides a taste of what it was like to be caught in the middle of geologic events, and how easily rumors can be passed along. The eruptions began in May of 1914, and steam explosions and ash falls were happening almost every day for the next year. This passage is from June 14, 1914:

Man killed by flying boulder from the blowout this morning.

As far as I have heard or read, no one was killed by the eruptions of Lassen, but given the date, the notation is a garbled early mention of the story of three men who climbed the volcano, only to have it erupt while they were standing on the crater's edge. One of the men, Lance Graham, got hit by a rock and was knocked unconcious while his "friends" hightailed down the mountain, thinking Graham dead. They came back to get his body, and he later related having an out-of-body experience on top of the mountain*. In reference to the "died again" comment, Lance lived until 1955.

I was aware about the story of the three men, and I knew the story of a famous set of photographs taken by B. F. Loomis of one of the ash eruptions (one of which is shown below), but for the longest time I did not know that the two were of the same eruption. The three men are in the ash cloud in the picture! 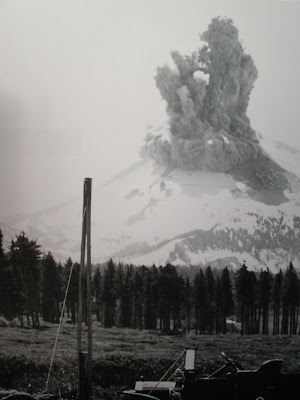 One last coincidence...I was telling this story to my California Geology class a few years ago when a student in the back row chirped up and said I was talking about her great-grandfather! A small world...

Garry, just to let you know; getting lots and LOTS of USGS notifications of small tremors today by Puerto Rico, all <5.