The Other California: The Day of the Fiddlenecks (a trip in the Mother Lode)

The Other California is my continuing exploration of the places in our state that don't tend to show up on the postcards, and are missed by most of the visitors. It's the first day of spring and we headed up into the Sierra Nevada foothills to seek out the Golden Poppy, which should be blooming explosively on the grassy slopes by now. We traveled east on Highway 132 out of Waterford towards the Gold-Rush-era town of La Grange. The poppies hadn't popped out in the lower foothill areas, but the slopes were alive with one of my favorite flowers, the Fiddleneck (Amsinckia). The shape of the flower is reminiscent of the head of a violin. 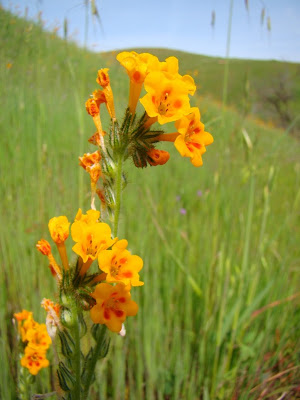 Amsinckia was utilized as a medicine and a food source by Native Americans, but the seeds and foliage are toxic to cattle. Today, for us, it was a beautiful splash of color along the slopes of the Tuolumne River, which were following out of the Central Valley.
Upstream, the first bedrock outcrops we encountered were low cliffs of rhyolitic ash of the Valley Springs formation. This gentle, quiet landscape was the scene of great violence between 22 and 28 million years ago, as huge calderas to the east exploded out vast amounts of pulverized rock and sent clouds rolling down the slopes of what would one day be the western Sierra Nevada. The rock is solid enough to form cliffs, but is easily shaped, so it was ideal for use as a building stone in the towns of the Mother Lode. 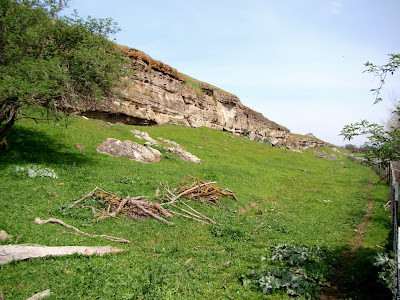 We passed through the quiet village of La Grange, looking at the 1875-vintage schoolhouse and cemetery, and a short distance east we encountered some of the evidence of gold mining (below). The sediments covering the surface were washed away to get at gold particles trapped in the small fissures and cracks in the bedrock below. Sometimes hoses were used. Downstream, where the sediments were deeper, giant dredges were used (these methods will be discussed in later posts). One of the dredges used in the area sits abandoned in a meadow just south of La Grange. 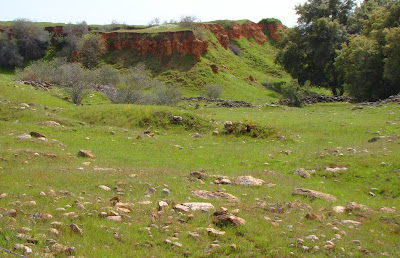 A bit east of the hydraulic pits, the old metamorphic rock of the Foothills Terrane start peeking through the soil cover. These so-called "tombstone rocks" are slate and phyllite that originated as mud and silt on the ocean floor which were accreted to the western edge of the North American continent in Mesozoic time. 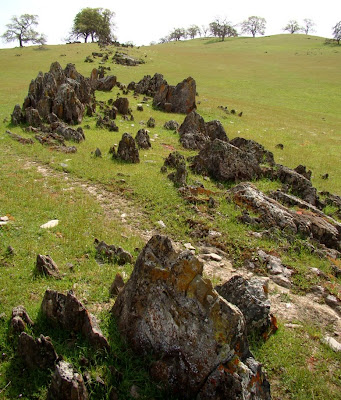 Some of the rocks include metavolcanic rocks and an occasional metaconglomerate (picture below, very small penny for scale). These rocks are far more resistant to erosion, and form long high north-trending ridges in the western Mother Lode. We found a delightful new pathway over the metavolcanic ridges from Don Pedro Reservoir to the village of Moccasin along Marshes Flat Road. On this spring day, greenery was everywhere, and most of the gullies had streams flowing. 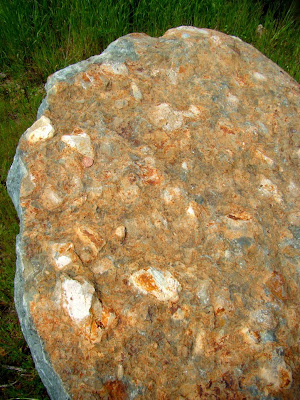 Did we find poppies? They aren't widespread just yet, but a few beautiful patches showed up along Marshes Flat road. There will be a great many more in the coming weeks. If you are in the area, make time to check it out! 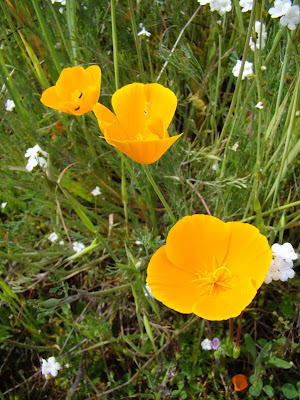 For an excellent road guide to some of the areas covered in this post, and for a discussion of remediation efforts along the Tuolumne River region, check out this guide from the National Association of Geoscience Teachers and Columbia College.
Posted by Garry Hayes at 8:04 PM

we lived near copperopolis for 30 years and i appreciate the recent photos of that area.

Marshes Flat is AWESOME... I've seen two bobcats and many wild turkeys in the area, along with amazing flowers. My favorite part of the route, hands-down, are the cascades, plunge pools and falls along Hatch Creek, which parallels the road several miles in. My quest for a beautiful shot of the falls last year helped me realize (the hard way) that the falls are on private property. Luckily I wasn't dumping any garbage over the cliff, which was the problem the vigilant property owner was trying to prevent. The link to some of the cascades photos is below.