Does Anyone Really Care About Rocks and Minerals?

Let's see...geology and earth science programs are imperiled at a number of colleges and high schools around the country. Teachers are being laid off. Federal and state geologic surveys are having their budgets deeply slashed, and some are proposed for elimination. These kinds of programs are critical to the health of our society as we face practically insurmountable problems of global warming, the end of plentiful fossil fuels, shortages of safe water, and many, many others. The programs and organizations are being cut because of a general lack of understanding of the geological sciences by legislators, and because they lack the kind of constituencies that other disciplines might have. Geologists don't have a lot of powerful friends. Is it due to a lack of public interest? I don't think so. 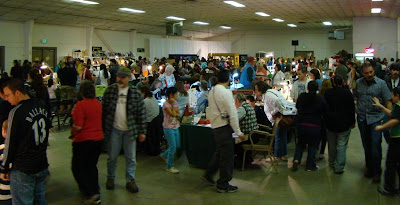 I'm drawing my conclusion from a totally non-scientific observation, seen in the photo above. You are seeing a huge crowd at a rock and mineral show. I'm not usually a real fan of these things, as in my experience, they are sometimes little more than highly commercialized ventures designed to separate cash from customers. There is, of course, nothing wrong with this, but so many times an opportunity is lost. I've got to say that our local rock and mineral show is a huge exception. The Mother Lode Mineral Society puts on a great show every March at our local fairgrounds. Thousands of people show up every year. What makes their effort so unique?

In a word, education! They devote a huge amount of space to displays and hands-on demonstrations for the visitors. The members of the society offer up wonderful displays of fossils, rocks and minerals, and presentations by paleontologists and mineralogists are going on practically every hour during the two day run. 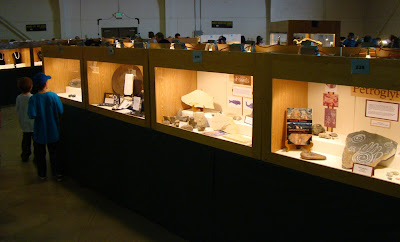 Our corner of the Central Valley in California is generally lacking a good foundation of earth science education. Only a handful of our high school educators actually have degrees in the geological sciences, and most of the elementary teachers never take a geology class to fulfill their science requirements in college. Our children hardly have an opportunity to learn about subjects they are naturally curious about like volcanoes, earthquakes, fossils, rocks and minerals.

A child attending the show may arrive thinking dinosaurs are cool enough, but when they leave, they will know that our corner of the country had creatures more interesting than regular ol' dinos: there were sabre-tooth cats, woolly mammoths, giant sloths, and in earlier ages, giant mosasaurs and 45 foot long megalodon sharks. That's a Tylosaurus in the photo below. One of its relatives was found just thirty miles away from the fairgrounds in the Coast Ranges. If they pay close attention, the kids will know the difference between igneous, metamorphic and sedimentary rocks. 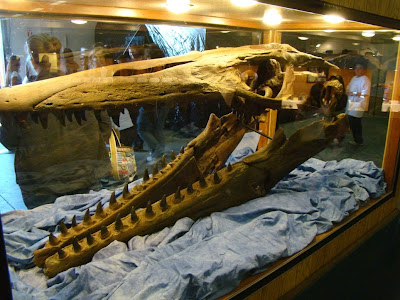 The show does have vendors; lots of them. It's just so very nice that their wares are interspersed with so many wonderful displays and educational resources. Did I fall for their siren songs of crystalline temptations? Of course I did! I apparently have a weakness for isometric crystals. Put a beautiful crystal of pyrite, garnet, or fluorite under a bright light, and I melt. I got a little sample of green fluorite from the Rogerly Mine in northern England, courtesy of Rocks in a Hard Place of Modesto. 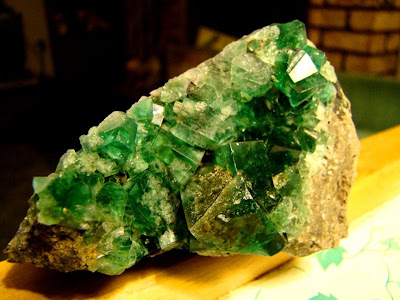