The Other California: I've Seen These Mountains Somewhere Before: The Big Ripoff! 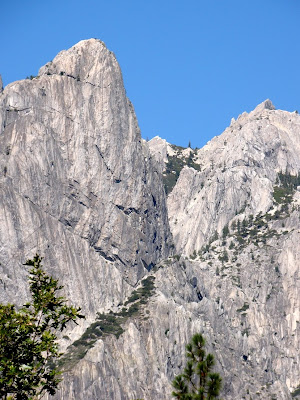 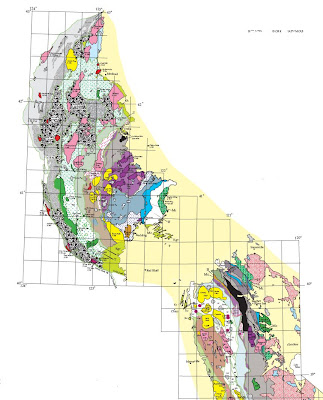 This is an ongoing exploration of the "Other California"; the wonderful geological places in our state that are rarely found on a postcard. After some geological distractions (like giant earthquakes in Chile and tsunamis in Hawaii), we are back on the road looking at some peaks that look strangely familiar. They're made of granitic rock, they've been subjected to exfoliation and jointing, forming the sheer cliffs and rounded peaks. The mountains here have been glaciated. Where would you think we were, if you are a dyed-in-the-wool Californian?
If you guessed the Sierra Nevada, you would be wrong. And right, too, in a sense.
We started a tour of the Klamath Mountains talking about their origin as bits and pieces of oceanic crust and continental fragments that were assembled into a complicated exotic terrane that was attached to the North American continent in Mesozoic time. We followed up by discussing the alleged presence of Sasquatch in the region (though the discussion didn't last long; the Chilean earthquake proved far more interesting as a scientific issue that week).

Today we note the striking similarities between the Klamath Mountains and the northern part of the Sierra Nevada (see the map above). Both mountain systems have rocks that are primarily metamorphic sequences that have been intruded by Mesozoic granitic rocks. The metamorphic rocks are of similar age and structure. They have been faulted in much the same way. They are, in few words, the same mountain range, at least in the origin of the rocks. Direct correlations of the complicated metamorphic sequences have been established in recent publications by the US Geological Survey.

The oddest part of the story seems to be the overall shape of the two provinces. They look as if they were bent and torn apart from each other and separated by a distance of around 60 miles. And they were, around 140-150 million years ago, in late Jurassic or early Cretaceous time. A shallow sea opened between the two landmasses, and several thousand feet of sediments were laid down on the rocks (the Hornbrook Formation). It was a huge rip-off!
By Pliocene time (4 or 5 million years ago), the region was a flat low plain, but it rose rapidly, as much as 6,000 feet, in the last few million years. Rivers coursing across the flat surface quickly incised the deep canyons that characterize the region today (small gravel remnants of the rivers can be found on some of the higher parts of the topography).
The implications of the similarity of the two provinces was not lost on the Forty-niners. Gold was mined from the metamorphic rocks of the Sierra Nevada Mother Lode, and the rocks in the Klamaths were clearly of the same origin. Gold was discovered in the Klamaths in 1848, and numerous towns sprang up soon after. The region was the second most important gold mining region in the state of California after the Mother Lode, with several million ounces of gold produced.
For some recent research on the uplift history of the Klamath Mountains, check out: Cretaceous Sedimentary Blanketing and Tectonic Rejuvenation in the Western Klamath Mountains: Insights from Thermochronology
Posted by Garry Hayes at 5:00 PM

Wow. I could have sworn the peak on the left was Leaning Tower by Bridal Veil Falls in Yosemite Valley. The similarity is uncanny. By any chance, does I-5 run through that valley?

Now that you mention it, they do look really similar! This is at Castle Crags State Park, and I-5 comes close to the it. I'll be writing more about it in the next post.