A Denizen of the Underworld in the Land of the Living 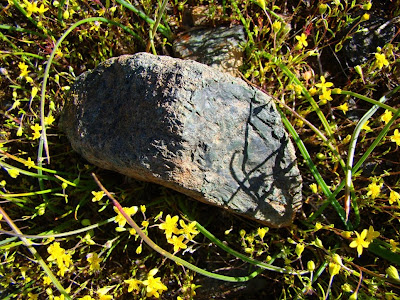 I was leading my students today on a geology field trip through California's Mother Lode. We were in the southern reaches of the 1848 Gold Rush country between the towns of Mariposa and Jamestown, with stops at some of the (near) ghost towns, the California State Mineral Exhibit with the 13-pound Fricot Nugget, and a surface exploration of one of the Gold Rush era mines.
It is a fascinating region to explore, with a wide variety of interesting rocks and minerals, including familiar ones like quartz and pyrite, and rarer minerals like mariposite and ankerite. For today's short post, I share a moment of reflection at a stop high above the Merced River in a canyon called Hell's Hollow.
The name is appropriate enough. The rocks are exposed along the canyon walls are serpentinite with some occasional pods of slightly altered peridotite, the rocks of our own physical underworld, the mantle. Like the underworld of myth and religion, the mantle is a place of unrelenting heat and metaphorical fire (the term igneous has the same root as ignite). Although we are finding that certain forms of life (like extremophile bacteria) survive deep within the crust, the mantle is not a place for the living. But sometimes, the rocks from deep places in our underworld are brought to the surface, and life can be tested against the chemistry of the land of no life.
As I walked along the ridge top, I was struck by the juxtaposition of this chunk of altered peridotite and the small yellow flowers that were growing in profusion across the thin soil. It turns out that few plants can tolerate these soils, as they contain high amounts of toxins such as nickel or chrome, and low amounts of needed nutrients like nitrogen and potassium. But some rare plants adapt to the harsh chemical conditions, and they are able to grow in profusion, and to our human sensibilities, beauty. 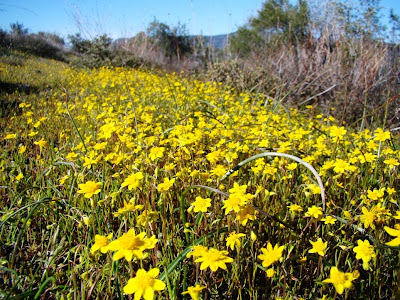 As I looked at this life among the rocks of the underworld, I thought of the strangeness of life on earth, our unlikely survival on this rock in space. Life is a struggle against the elements, and so many times that struggle is against the odds imposed upon us by society. Land of the Living is the title of a song by Lucy Kaplansky that I have always found haunting (lyrics here; listen here). The song is about surviving in bad times and bad situations. There has been too much grief in the world recently, in Haiti, in Chile, in Afghanistan, and so many other places, whether caused by natural disasters or human ones.