"...(they) must teach them how to get history from the ground" 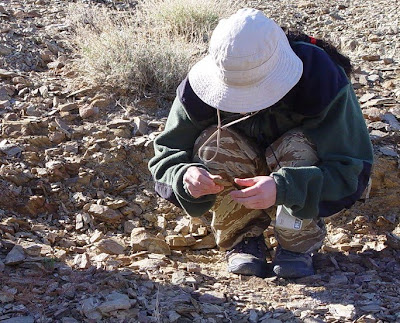 "After customary greetings and handshaking, White gets down on his hands and knees with a few fossil hunters to show the tribesmen how the researchers crawl on the ground, shoulder to shoulder, to look for fossils...White explains that these stones and bones reveal the ancient history of humankind. The Alisera smile wanly, apparently amused that anyone would want to grovel on the ground for a living. They grant permission to search for fossils - for now. But they add one caveat. Someday, they say, the researchers must teach them how to get history from the ground."*

This short passage, from an article this month in Smithsonian magazine, brought to mind much of what I find so wonderful about being a teacher in the earth sciences. And a bit of frustration that I occasionally feel as well.

Human beings are curious creatures, and the earth sciences are a treasure trove of fascinating phenomena. Children are endlessly intrigued by dinosaurs, volcanoes, earthquakes, crystals and rocks. Though they try to hide it under a veneer of jaded indifference, my "grown-up" students will suddenly act like excited kids when unleashed on a slope that may reveal a fossil trilobite, a shark tooth or a gemstone. To enter the world of geology is to enter a realm of time and space where pretty much everything that could have happened did happen at some point in the past: massive volcanic eruptions, asteroid impacts, exploding stars, mass extinctions, evolution of strange and wonderful creatures of all shapes and sizes. The clues to these events lie in the grains of sand and silt, in the shapes left behind in the rock of the creatures that swam, walked or crept in numerous environments, in the trace elements found in the rocks. There are even atomic clocks in the rock that allow us to put a date to these events. I love being a teacher, I love being a story-teller. It is what makes "groveling on the ground for a living" a wonderful career. Reading of the natural curiosity of the Alisera people made me smile in recognition of the same impulses that led me into the earth sciences.

Because I realize this curiosity exists, I am patient with the visitors from the community who come to my office, explaining why the chunk of rock they found in their yard is not a dinosaur egg, or an asteroid fragment. They have come to learn something, after all. My enthusiasm dims a bit sometimes when they say "well, where can I go to find out the truth about my rock?" (it happens...), or they ask if I want to buy it anyway. But sometimes something really neat happens. A woman last year brought in what she thought was a piece of petrified wood, only to find she had a one foot section of a mammoth tusk!

But how to explain the willful and downright irrational ignorance I encounter on a too-regular basis? Well, I can't. Sometimes it is relatively harmless, but in other instances it dangerously misguided.

In the relatively harmless category we have a long discussion from Eric's Dynamic Earth about a hilariously over the top video made by an expanding earth supporter. What started as a bit of hilarity among geologists turned into a long debate with true believers, who turned out to be ignorant of some of the most basic tenets of geology. But they believe the earth is expanding, by golly, and we geologists are involved in a conspiracy of silence, preventing the truth from emerging (or expanding, as it were). For a while it was amusing to respond to the questions, but it was soon clear that the people asking the questions had no real interest in learning anything new, and especially not from people who actually understand the processes involved.

And then there are the discussions that pop up once in awhile about evolution and global climate change. The former gets into religious issues, and the latter into conservative politics. I don't want to go into details just now, but I've had a frustrating week in both areas. In short, it saddens and angers me how easily people will believe there is some kind of scientific conspiracy designed to control minds and research dollars. It makes no logical sense, but that doesn't matter. It does make sense that energy companies who stand to lose money would pay immense amounts of money to manufacture doubt. In any case, people have been told specifically what to believe by preachers with no science education, and senators or talk radio hosts with no science education. But the Jim Inhofes and Rush Limbaughs of the world do have their agendas, and the majority of us will not benefit if they are successful. Neither will our grandchildren and great-grandchildren. And how they kill a sense of wonder and understanding!

The sciences like biology, geology, and astronomy have led humanity into some of the greatest adventures of our history. We've explored the limits of outer space, and the innermost workings of the cell. We explored the vast expanse of time, the development of life, and the forces that have moved continents thousands of miles. I don't know the solution to dealing with global warming deniers or creation scientists (although I have some suggestions here). It's not easy, but it must be done.

Below, a treasure of the past, and one of the more exciting moments in one of my student's life! 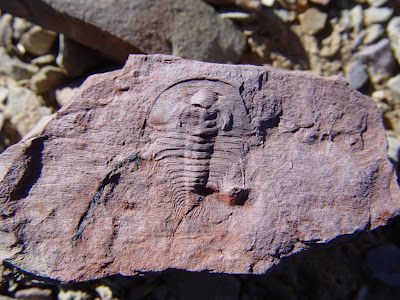 I took my intro class to see a semi-active debris flow this week. (It flows when there's been enough snowmelt, so in the morning and early afternoon, it isn't moving.) They played in the mud like little kids. I love the way geology can bring out the kid in almost anyone.

Thanks for your patience with those who just want to know something. Having surprised myself by becoming fascinated with the rocks where I live (just as I am becoming eligible for Medicare), getting the information I want is a bit of a slog, but it's been worth it so far. And thanks for your blog.