The "Other" California: Havin' Fun With Sasquatch 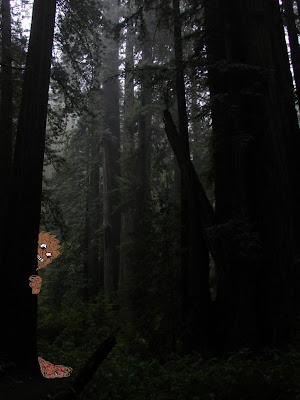 An exploration of the Klamath Mountains of California is not complete without a discussion of...well, let me mention a field trip story. The punchline isn't very exciting, but here goes.

We take a field studies trip to the Cascades every other September. To split up some of the long drives, we leave on a Thursday afternoon and drive to a state park on the Sacramento River near Red Bluff. We usually arrive about 9:30 at night, at which point we roll out our sleeping bags and get a good night's sleep before really starting our class the next morning. Sometimes we have complications. One time we arrived to find the entire campground occupied by a convention of ultra-libertarian, almost-militia type folks having a barter fair. We had to barter with a very drunk organizer who was suspicious that we were members of the federal guvmit to negotiate out a little corner of the campground for ourselves. We had kind of a nervous evening.

Another year we had a different problem: we arrived and the entire campground was closed for renovations! I wasn't quite prepared for this, and we headed north on the highway looking for another place to stay. It took us a couple of wrong turns looking for a non-existent camp along the Sacramento River ("it's on the map, dangit!"), but finally around midnight we found a KOA that was willing to take in 30 weary travelers on short notice (and for a price). It was nice of them to put up with us, but it was an unremarkable place except for the men's bathroom. It had a giant diagram on the wall of all the Sasquatch sightings in northern California! We were in Bigfoot Country!

A discussion of Bigfoot is going to carry us into fringe territory along with UFO's, Lemurians, Atlantis, ghosts and who knows what, but at least Bigfoot is regarded as "fun". No one seems to think that they are plotting to take over the human race, or that they are attacking and eating people (apparently president Theodore Roosevelt provided the only exception).

So why won't biologists and other scientists accept the existence of Sasquatch? After all, there have been hundreds, maybe thousands of reported sightings, along with dozens of photos and footprints, especially since 1958 when tracks were found around the equipment at a logging camp (tracks made by the company owner to scare away vandals). We live in a visual society...why aren't photos enough?

I've been having fun reading some discussions lately about whether Yosemite's Half Dome can be seen from the floor of the Central Valley in California. The main evidence lies in a dozen or so photographs that have been posted on the internet by different individuals (including me). The interesting aspect of the discussion has been the many skeptics who insist that Half Dome absolutely cannot be seen from the valley, and who charge that the photos are an elaborate photographic hoax. So...a few people say it CAN be seen and offer a few grainy photographs, versus expert photographers and hikers who clearly know that it CAN'T. Isn't this the same situation that we have with Sasquatch?

Not really equivalent at all. Despite any arguments and calculations that can be offered by detractors, all one has to do is go to the right spot on an unusually clear day in the Central Valley, and there it is. Half Dome isn't going anywhere, and confirmation is easily achieved.

On the other hand, if Bigfoot-Sasquatch were an actual living species, the implications would be staggering. A second hominid species, a large one, living in North America alongside humans would be an astounding discovery. How did it evolve? How closely related is it to Homo sapiens? How can it have escaped discovery despite the intense development of the western states and the intense logging activity in the places where the species lives? And if the existence of the creature were to be in some way confirmed, what are the legal ramifications? Endangered Species Act? Would they be placed on reservations? (yes, that question is an indictment about government attitudes about First Nation/Native American people). In a word, it would be extraordinary.

So here is the problem: there isn't a shred of physical evidence that Bigfoot exists that can be subjected to any kind of scientific scrutiny: there are no bones, either recent or ancient, no droppings, no nesting/bedding sites, no artifacts, no bodies, no fur. Wildlife biologists will happily admit they were wrong when the physical evidence appears, but in a century of searching, nothing has emerged.

And consider something else: motivation. When we were accused (in a good-natured way, I hope) of being hoaxers in the Half Dome affair, I would have to respond: what do we have to gain? No one is going to pay us thousands of dollars for a grainy, slightly out-of-focus picture of Half Dome (not that I would turn down an offer!). But if I said I had a genuine picture of a Sasquatch (and I were a talented photo-manipulator; see the photo above!), I could potentially earn a fair amount of publicity and cash, even if the photo is later revealed to be retouched (the picture above is real, dangit, I swear it with my fingers crossed!).

Could Sasquatch really exist? Of course. But it is extremely unlikely. The evidence to confirm the existence of Bigfoot would have to be overwhelming. A century ago, a German meteorologist named Alfred Wegener said that continents had been drifting about the planet. Scientists were unconvinced by his evidence, which involved rock similarities, fossil similarites, and paleoclimate similarities. It was good scientific data, but geologists were able to offer alternative explanations that did not require movement of continents. It wasn't until new discoveries in the 1950's and 1960's in unexpected disciplines like paleomagnetism, and new technology became available that revealed details of the ocean floors that Wegener's hypothesis was accepted. In the process, the idea grew into a much more encompassing theory called plate tectonics (make no mistake: a theory is accepted scientific fact; it is hypotheses that are unconfirmed potential explanations). The fact that his hypothesis came to be accepted doesn't mean that any fringe science is automatically true. Scientists in all disciplines pretty much have to be skeptics by nature, and fringe ideas must meet the same exacting standards of evidence that any other hypotheses must meet.
Posted by Garry Hayes at 12:59 PM

About 30 or so years ago when I was a kid, my dad took me to the Big Foot Museum in Port Costa, CA. As a kid I asked why haven't they found one yet and the curator told me they are good at hiding. After all they have to exist I saw the "offical" casting of its foot print.
Doug N

I lived many years in Washington Big Foot country and although I never got to see, hear or Smell one I heard 100s of stories. In fact Skamania County has a law on the books protecting Big Foot. It's illegal to shot it.

Garry,
It's a funny coincidence that both you and I used cartoon-characters-on-the-right-side-of-a-doctored-photo images within 24 hours of each other. I wasn't aping you, I swear!
C

Garry, I was reposting Dave's awesome landslide video from yesterday, and found a geologic overview & field guide for a portion of CA 96 along the Klamath river. (3.3 MB PDF). I think the trips I did in the 80's were probably loosely based on this pub. but this is the first time I've seen it. This is the kind of guide that makes for riveting reading for geogeeks. Just sayin'...