I'd Like To Speak to your Site Engineer, and uh, Why Are You Strip Mining Our National Park? 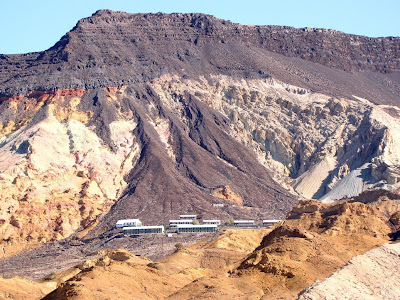 Who in the world chose this particular slope to build the offices and dormitories for the mine complex near by? Maybe the perspective makes it look steeper and more dangerous than it actually is, but every single piece of rock on that slope came down quite rapidly from the cliffs above. Maybe someone familiar with the site can explain to me how those buildings aren't deathtraps.

The first Europeans to fully experience the delights of the Death Valley region were the Forty-Niners who got marooned on the valley floor for several weeks after running out of supplies. They gave the valley its name, even though only one of the travelers actually died. But the real pioneers were the miners who soon followed. A lot of dreams of avarice and riches died in the vicious desert environment, and few of the mines ever actually paid dividends to their owners.

A big exception was the mining of borate minerals, used in soap-making, glass-making and a wide variety of other industrial uses. Borates were a rare resource in the world prior to the 1870's. They were discovered in California during the 1860's in the Clear Lake area, but it wasn't until large deposits were found in the Death Valley region in the 1880's that serious mining took place, despite the extreme isolation. The nearest railroad depot was near Barstow, more than a hundred miles away. The mining companies designed the twenty-mule team wagons to transport the ores, and the wagons became an enduring symbol of the company even into the present day.

The mines were active until borate minerals were found in the Calico Mountains near Barstow, right next to the railroad depot. The Death Valley mines were immediately idled. A failed agricultural well near the present-day town of Boron in 1927 revealed the presence of a vast body of borate minerals underneath the desert floor, and a giant open pit mine was quarried. It continues to provide much of the world's supply of borates, despite an ongoing bitter strike.

Old mines, with their headframes, tailing piles and associated ghost towns, are a colorful part of the history and heritage of the Death Valley region. Which makes the scene below all the more jarring. It is a modern open pit mine along the road to Dante's View above Zabriskie Point. Even though the region was made a national monument in 1933 (and a national park in 1994), prior existing claims were honored and mining continued on a small scale. The initiation of highly visible open-pit mining operations in the 1970's elicited storms of protest, and Congress changed the laws controlling mining in the parks in 1976. The underground operations of the Billie Mine at Ryan (seen in the picture above) ended in 2005, so at this time no mining is taking place in Death Valley National Park. The Park Service has some excellent sites describing the history of mining in Death Valley here and here. 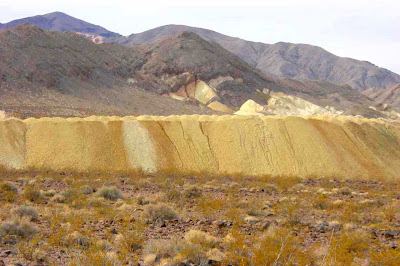 What isn't clear to me is whether the tailings from the 1970's operations will ever be cleaned up.
Posted by Garry Hayes at 8:10 AM

It does seem like strctures are built in some odd and potentially dangerous places, especially in CA. Hope your having a good time at DV.