Another Whisper from the Past...and Another Catastrophe 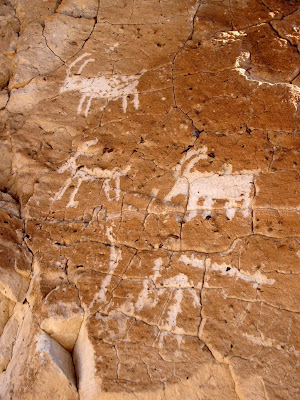 I am always kind of haunted (in a good way) by ancient petroglyphs and pictographs. Most of my teaching in a classroom involves delivering information using one kind of rock (chalk) to form images on another kind of rock (slate, or an artificial derivative of slate). My images are far more transitory (they last right up to the moment the custodian erases them), but I feel an affinity for those who left images in stone hundreds or thousands of years ago. They were telling a story, sometimes with an obvious message (bighorn sheep here!), and sometimes with symbolism and codes that are long lost to history.

I'm back from our field studies journey in Death Valley, but I'm still finding a bit of material to post. We were out on the last day, making our way south out of the valley over Emigrant Pass and Wildrose Canyon. In a drier year we would have paid a visit to Aguereberry Point or the Wildrose Charcoal Kilns but snow and ice prevented us from doing so. With the additional time we paid a visit to some striking petroglyphs on a rhyolite ash flow of the Nova Formation. They depict animals, as seen above, and quite a few indecipherable symbols. Although one should NEVER touch the rock art, nor should one do rubbings, it is certainly a temptation! I wanted to reach up and touch this surface that was another's message. It's a moment of communicating with a fellow human being across the centuries (don't worry, neither I nor any of my students were touching the petroglyphs!).

While looking at the rock art, I took a step back and looked at the canvas the artist had chosen: an outcrop of tan colored rhyolite ash perhaps 30 feet thick. It lies interbedded with the conglomerates of the Nova Formation, which formed in a series of chaotic basins that developed over an extending terrane in the Panamint Mountains between 5.4 and 3.1 million years ago (the Emigrant Detachment). The rhyolite ash was formed in a violent explosion that inundated the region with the white powdery material. I looked closer at the rock and was struck by the absolute starkness of the basal contact. I was looking at a single moment in time, a matter of a few seconds from a momentous event several million years ago. It was a castastrophe. 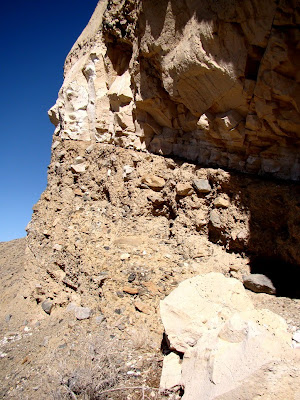 By catastrophe, I don't mean a worldwide conflagration that eliminated whole species across the the planet. It was more local, perhaps affecting only a few hundred or few thousand square miles, but any living thing living within the region of the eruption was instantaneously buried in hot ash. Look at a close-up of the contact below... 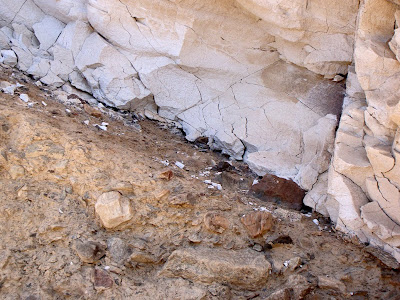 This was an alluvial fan surface. A rugged mountain close by was shedding debris via streams, floods and mudflows, leaving a rocky landscape. It could have been a sunny day, maybe cloudy. Vegetation was growing among the rocks, and a variety of large animals were grazing nearby: numerous species of horses and camels, antelopes, mastodons, and the carnivorous animals, ancestors to today's canids and felines. There was a vast rumbling, a huge explosion ripped into the sky, and darkness quickly engulfed the area. Animals surely tried to escape, but there was nowhere to go. They were buried. Their last moment is memorialized by a thin line in a cliff that divides a conglomerate from a white ash layer.
Posted by Garry Hayes at 8:43 PM

This is my favorite thing about geologizing -- these moments of insight, these visualizations of past drama. When you speak the rock language, they can communicate with you. You're privy to stories others are utterly oblivious to.
PS - The "Nova" Formation !! I love it!

Garry, once again an excellent post. I didn't get to see any native rock art while at DV, but the natural rock art is so captivating. So much went on here. Do you think there's any fossils?

I'm pretty sure they've found fossils in the Nova, but I don't know the specifics