The Redlands Earthquake Swarm: California Has Her Faults; Lots of Them!

A swarm of small and moderate earthquakes has been shaking things up in Southern California in and around the town of Redlands. The largest, on February 13, was magnitude 4.1, with five additional events between 3.1 and 3.6 in the days that followed. Well over a hundred smaller quakes have been detected as well. Swarms are interesting and exciting if you live on top of them, but they don't usually signify bigger things; the earth is shifting a bit, and that is often the end of it. On much rarer occasions, they may be a sign of an impending larger event, a foreshadowing disturbance of the earth similar to the cracks and pops a tree branch makes before it breaks (disclaimer: I am NOT making ANY kind of prediction; I don't have any access to data, nor do I have the background to do so, and seismologists know better than to try and make a short-term prediction of any quake). My message for the day is to remind people who live in earthquake country that they should ALWAYS be prepared for a large seismic event. 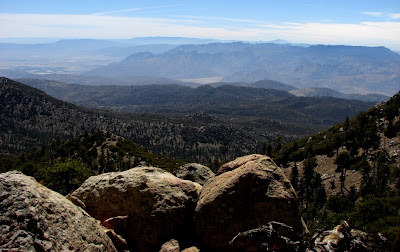 The view from Santa Rosa Peak in the Peninsular Ranges reveals the parallel valleys of the San Jacinto fault. The perspective is towards the west; the San Andreas fault is some twenty miles to the east of the peak

There is another opportunity here: a lot of people, when they hear of quakes in California, think San Andreas Fault. Many California residents who have lived here all their lives cannot think of the name of another fault in the state, but our landscape is literally crisscrossed by active faults (look at the map above; most of the brown lines are active faults). Most earthquakes in CA happen on faults other than the San Andreas, and this week's swarm is no exception. It appears to be taking place on one what is arguably the most active fault in the state, the San Jacinto fault.

The San Jacinto fault is certainly part of the San Andreas system. It splits off from the San Andreas at the east end of the San Gabriel Mountains, and runs roughly parallel to the San Andreas for 140 miles south into the Imperial Valley. It has the same type of motion, right lateral (features on the opposite side of the fault have been shifted to the observer's right). Since it began moving a few million years ago, something like 15 miles of lateral motion has taken place.

The San Andreas fault is justly famous for several devastating earthquakes, including the 1906 San Francisco event that killed 3,000 people, and the 1989 Loma Prieta quake (the World Series quake). It also produced a magnitude 8 event in southern California in 1857. But most of the time the fault is quiet (in a menacing way; it is storing up stress). Compare this with the history of the San Jacinto system (courtesy of Wikipedia):

1890 - Magnitude 6.5 that occurred in the "San Jacinto or Elsinore Fault region".

1918 San Jacinto Earthquake - Magnitude 6.9 earthquake strikes the same area that was damaged by an earthquake 19 years earlier, with an epicenter roughly 10 mi NW of the previous earthquake.

1987 Superstition Hills Earthquake - Magnitude 6.6 (Note: some consider it to have occurred on a fault completely unrelated to the San Jacinto Fault Zone)

These quakes are considerably smaller than the 1906 event, by a factor of 32 or more (it takes the energy of 32 magnitude six quakes to equal the energy of a single magnitude 7 quake; a magnitude 8 quake is 32 times more powerful than a magnitude 7 quake and more than a thousand times more powerful than a six). But they clearly happen more often . The message is clear: to live in California, we must be prepared not just for the BIG, HUGE ONE, but also lots of lesser BIG ONES.

I was just talking to someone about the SJ fault the other day. I am much more concerned about the SJ than the San Andreas, and the history you outlined is the reason. Thanks for bringing that up, Garry. Hope you're well, and that your ground isn't as shaky as ours right now.

Am sure you are aware of this site, but others may not be: http://www.data.scec.org/faults/faultmap.html It is a cool site of faults in Southern California.

What makes it so totally cool is the fact you can click on one of the "area" maps and then click on any of the faults which will then open a window giving you the name of the fault, the length, nearest communities, most recent surface rupture and more notes and references.

Thanks for the comments! Mike, I (dare I tempt the gods?) kinda miss feeling those little quakes that I remember from southern California. I've only felt two quakes here in the Central Valley, including the 1989 Loma Prieta.

Cherie, thanks for the link to SCEC. They do good work, with lots of good info on their site.

Hi Garry,
Just curious what your thoughts are...Do you believe it's possible the "Redland's earthquake swarm" can be tied into or related to all the recent activity within the ring of fire-namely Chile?

Thanks for the comment, June. The order is wrong here; the Redlands swarm would not be related to the Chile quake, and neither is the little swarm in the Coso Mountains east of the Sierra. A big quake like this morning's Chile event may now be setting off small tremors in other parts of the world. When a quake as big as 8.8 occurs, the waves travel across the planet, and here in California the land was rising and falling a fraction of an inch as the waves passed through. This movement is sometimes enough to set off small tremors when a fault system is stressed enough.