What? You Were Expecting This? 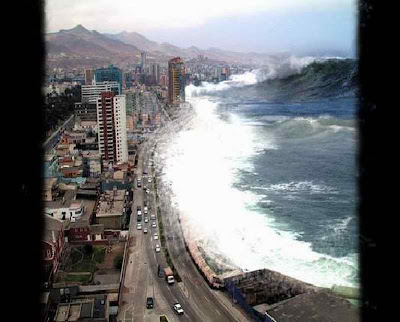 If you were watching the coverage of today's tsunami in the Pacific Ocean basin, you could be forgiven for thinking that this was what was converging on Waikiki, given the breathless reporting that took place on the cable networks. This photo began life as a photoshop effort that circulated on the internet in the days following the Indonesian earthquake and tsunami of 2004. It wasn't enough that the tsunami killed hundreds of thousands of people throughout the Indian Ocean. Someone had to try and make it seem bigger (if someone actually wants to admit owning a copyright to the photo, let me know and I will take it down if you wish).

I began the day being somewhat impressed with the quality of the discussion of the massive earthquake in Chile. Some of the newsreaders displayed some level of knowledge about just how big the quake was (the 5th largest ever recorded in the last hundred years or so) and something of how quakes are assessed and measured. But then the scene shifted to Hawaii and I became more and more disillusioned.

What a wonderful opportunity to educate an audience on the nature of geologic hazards and processes! A tsunami was coming and the story would unfold in front of the world. We would be able to see it happen and even better understand what was happening. What took place instead? Four or five wasted hours of breathless useless words, an unrealistic build-up to a climax that wasn't going to happen, and a near total misunderstanding of the extraordinary thing that did happen right there on the screen in front of us. The arrival of the tsunami was obscured by one of those ridiculous banners (which I could almost swear said "BREAKING STORY: HAWAII ABOUT TO WASH INTO THE SEA", but I could be mistaken). The newsreaders went on babbling, blithly unaware of what was happening on the screen. Because it wasn't killing anyone, I guess.

But I forget myself...of course television exists only to sell commercial products, and the only way products will be sold is if millions upon millions of people are watching. News is merely a means to an end, and the end has little to do with educating the public. But who am I to complain? I'm just a geologist and teacher who felt horribly disappointed today at what could have been.

I think about the Olympics I've been watching this week...tens of millions of dollars were spent designing a media extravaganza in which every aspect of every sporting event could be seen from three or four different camera angles. There seemed to be hundreds of expert commentators who could describe every single move made by every single athlete. Every triple-toe-lutz, every slalom turn.

But to describe a geologic event of worldwide importance and interest? With twelve hours of lead time, the networks got all of one camera pointed to Hilo Bay?? As far as I am concerned, the day was an epic fail by the news media.

I see little evidence that the cable networks employ even a single scientist. The only scientists ever in evidence are the "meteorologists" but does anyone think they were chosen for their expertise? Screen presence is everything, of course. Most of the weather people show a shocking ignorance of climate science and the issues involved in global warming and climate change. Of course when a volcano erupts or a fault slips to produce an earthquake, the network newsreaders interview volcanologists and geologists. But they almost never ask the right questions, and half the time they are looking for the answers that feed their preconceptions and the need to increase viewership.

Am I being too tough on the cable networks? What do you think?
Posted by Garry Hayes at 5:46 PM

I agree completely with the way the news networks handled this. On one website the media was desperately trying to link Haiti and Chile together. After a while my eyes glazed over, and snapped back into focus when a USGS representative was being interviewed. I, however, did not get much out of that, either.

no, you're not being too tough ... like you I was pleasantly surprised w/ CNN's explanations of subduction zones and how differences in shaking, distance from epicenter, and building codes made this quake distinct from the one in recent collective memory (Haiti) ... but, as you say, when they went to the tsunami coverage it's as if they were upset that there wasn't widespread devastation. They spent the entire morning stoking fear and then when the tsunami did what was expected they turn around and say "well, it wasn't nearly as bad as people feared" --- yeah, media, YOU were the ones fearing that.

Don't have TV or cable so can't say for sure on this particular event. However, I've seen the stupidity and sensationalism before. It's really not about education and information, it's all about $$$. Maybe that's why I don't bother to watch this crap. Instead I feel better informed reading your blog Garry.

ArgghhH! Hop on over to phreatic.blogspot.com to see my reaction to CNN's Rick Sanchez. Here's the last bit of his Seargent-intense interview with a Dr Frankel from Georgia Tech:

SANCHEZ: That's important. Sorry. Um, well, this is interesting. I mean, I have never seen something develop like this and science being used the way you guys use it to get all of your material.

By all means no! You are not being too tough! I totally agree with you on this. It's all about the money. Science is only considered if and when it is profitable, i.e. when it can be of some use to explain death and catastrophe. If none of this exists then it becomes an eccentricity that most people don't care about. That's why blog dedicated to discuss and popularize science are so important!

Garry:
Great analysis on this and your previous couple of posts. I totally concur.
C

You are not too hard on them. The coverage was below even their usual poor performance. I was checking geology blogs and was pleased to see your coverage.