Death Valley Not Quite So Dry This Year... 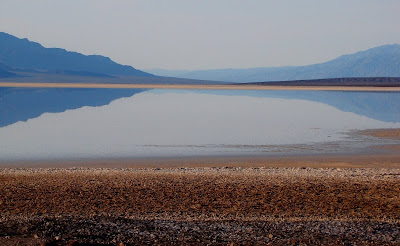 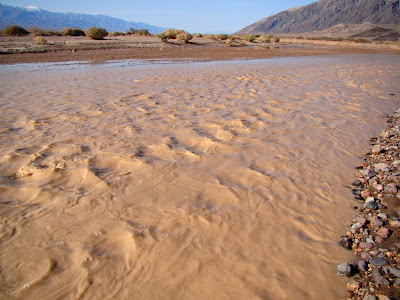 Blogging from the road! There is actually some web access in Death Valley...slow, sensitive, moody, but it works, sort of. I'm out here with nearly three dozen students and volunteers, experiencing an unusually wet climate (correction: "weather", see the comments) by Death Valley standards. They've received a year's worth of precipitation (~2 inches!) in about three week's time. Most of the dirt roads are out of commission, and some of the paved roads are still impassable as well (Artist's Drive and Dante's View). Still, we have found plenty to do.
There are certainly some unusual sights for Death Valley: morning dew soaking our camp in the morning, a bit of fog in the early morning, but best of all: a flowing river and a huge lake!
The Amargosa River drains a huge region of western Nevada, but is generally dry most of the time except along a few precious stretches where ground water is forced to the surface. This year it is raging torrent (ok, a babbling brook) all across the bottom of the Death Valley graben. One could almost float an inner tube in it.
The lake covers a fair portion of the ~100 square mile saltpan. Although it is large, it probably is no more than a foot or so deep, and will undoubtedly dry up in coming months as the weather warms up. It provides a beautiful foreground for viewing the snow-capped peaks of the Panamint Mountains.

Garry, I hope you at least do a bit of hiking in Titus Canyon; It's worth the walk!

It's prolly gonna be a banner year for flowers with all that rain!

Enjoy your stay, and I look forward to seeing more pics.

Titus is a great explore! The road in the canyon is closed, but we will try to hike up from the downstream end if we can get through. Hoping Dante's View will open up too.

Did the Titus Canyon road get washed out?

Most of the gravel roads in the park are closed, I don't know the extent of damage in Titus, though from past experience, the Narrows take a real beating anytime water flows there. Hoping to check it out tomorrow!

Great photos. Thank you for letting us follow your field trip from the other side of the Atlantic. Here's what wrote about it in my blog:
http://lisbonstructuralgeologist.blogspot.com/2010/02/death-valley-ongoing-field-trip-by.html

Gorgeous photos and look at those standing waves. I'm really going to have to go there someday - even if I am not lucky enough to see any water intthe valley.

Hi Gary,
Found your blog by following a Twitter link from another geotype @highlyanne. I once had the privilege of being in DV during great rain storms. Some other visitors were complaining they had come to see a desert! I don't think they realized what an unusual gift it was to see the desert wet! That said, may I recommend a slight correction to your post. You may appreciate it, being an educator. I would say you were experiencing, "unusually wet *weather*" not climate. More likely a weather event rather than a change in climate - at least for now.

I did say climate, didn't I? And that after spending an entire week explaining the difference to my students in several classes! An unusually wet winter season due to the effects of the El Nino warming of the Pacific.

You'll have to use your del and /del tags to correct.