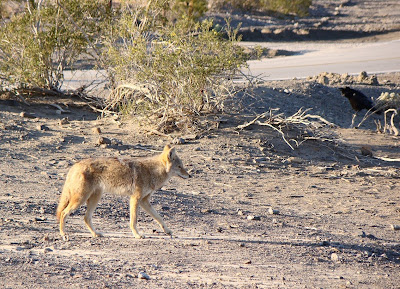 Not a particularly geologic entry tonight, but I have never had the chance to photograph a coyote from a reasonably close distance. The morning patrol at Stovepipe Wells Campground was in full swing today, and Wily E. Coyote was cooperating with yours truly. It could have been the breakfast burrito I was chomping on, but I wasn't sharing.

If you visit a place like Death Valley, and feel a need to bring along Fifi and Princess, you are allowed to. If you wonder why they are supposed to stay on leashes, here is your answer. When the coyote appeared on the scene, I noticed that two little Yorkies were leashed to the bench in front of the store. Wily E. noticed too, and was coming over to investigate. The owner dropped his purchases and gathered up his little treasures in a hurry! 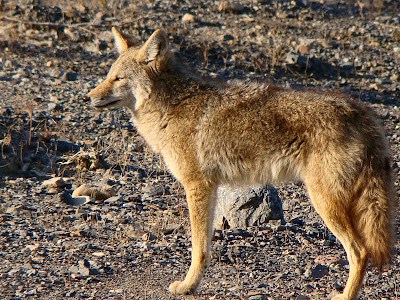 Coyotes are an American original. They evolved here, and have been found as fossils across the North American continent and especially in California, at the La Brea tar pits and numerous other localities. They are one of the few predators that has expanded its range, despite the efforts of humans to eradicate them in many places. The ones I've seen in Death Valley have looked pretty healthy (in part, no doubt, to the folks that left their pet food...and, uh, their pets outside at night).
I enjoyed their night-time serenades!
Posted by Garry Hayes at 10:03 PM

Nice shots of the coyote Garry. I saw one while there also. Some people just don't understand about pets and wildlife.

Will never forget my geology field camp trip to Death Valley. We slept under the stars. Sometime in the middle of the night we awoke, surrounded by a curious group of coyotes.

No doubt thinking, "are they tasty, maybe?"