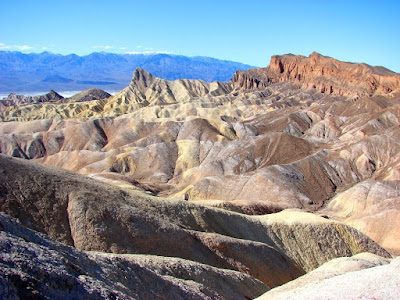 Let's see...record snowfall in Washington, D.C. and Baltimore...it must be field trip season in California! We leave tomorrow on a five-day trip to see the most geologically fabulous national park in the country: Death Valley. Conditions are expected to be clear and sunny, with highs in the upper 70's and lows in the upper 40's.

This is not to say that all is flowers and sunshine in the state. Southern California has been hit by a series of very wet storms in the last few weeks, and the huge burned out area of Angeles National Forest has had a big problem with mudflows and mass wasting that has damaged dozens of homes. And despite all the rain and snow in our state, the drought is not yet a distant memory. California's population has reached the point that even with normal precipitation, we barely have enough water to meet our needs, and the farmers are still hurting.

Still, this is an incredibly pleasant time of year to visit Death Valley. The region received several inches of rain in recent weeks, and the flowers should be beautiful (in late March and April, actually). We've had trips that included horrific duststorms, snow, rain, and flashfloods. But mostly it is nice, and the night-time skies are brilliant with stars (the Zodiacal light is especially visible in the dry desert environment). I especially enjoy walking out from our campsite onto the Death Valley Sand Dunes at night; it is a fascinating environment in the dark, with the ghostly dunes and uncertain horizons.

Death Valley has the broadest spectrum of rocks of any national park I can think of. Except for the Archean, all the major periods, eras and eons are represented, including a stratigraphic column that is more than 5 miles thick (compared to 2 or 3 miles at Grand Canyon) reaching across 1.7 billion years. Numerous examples of volcanism, folding and faulting can easily be observed. And for the geomorphologists, there is a rich collection of alluvial fans, playas, horst and grabens, and salt pans. For the photographers, it is paradise.

There is a spotty history of wi-fi coverage in the park, so posts may be spotty for the next week, but I'll try to keep in touch. Seriously though, to my friends back east, stay warm and safe in the storms.

The photo is the panorama from Zabriskie Point, with Manly Beacon just left of center, and the Panamint Mountains in the far distance. From the summit of the Panamints at Telescope Peak to the bottom of Death Valley at Badwater, the elevation difference is more than 11,000 feet. The sedimentary rocks in the foreground were deposited in a fault graben that predated Death Valley, in Miocene and Pliocene time, around 5-13 million years ago.
Posted by Garry Hayes at 7:30 PM

The one field trip I took to Death Valley was for 4-day trip for Structural Geology and we went over Spring Break. The weather was great and it was nice to have two full days (instead of the standard weekend trip). Great trip, very interesting...would like to go back. What group is going out there? Is this a school trip?

It's a community college geology field trip, a collection of students from a physical, historical, and California geology class.

Darn, I'm going to miss another field trip. Glad I saw Death Valley last fall. I was so impressed. I'd work there, but only during winter.

WIFI was spotty when I was there.