I Have a Dream...in which the 24 Hour Cable News Networks Serve a Useful Purpose 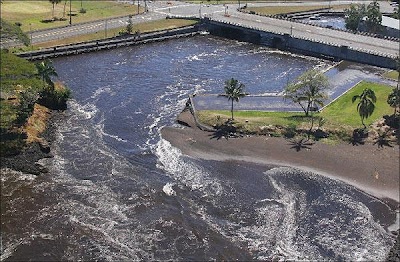 Photo of tsunami surge from West Hawaii Today
I have a dream, or more a fantasy, because dreams are more likely to come true. I fantasize about the day that a cable network newsreader (I know they like to call themselves "anchorpeople", but forget it) stands up in front of the television cameras and says, "I'm sorry, but I and the entire news team in this room and on the site of the geological event out there haven't got the faintest idea of what we are babbling about. So we are going to suspend our coverage until we have hired a correspondent who has the scientific education to give us a cogent and reasoned explanation of what is going on."

My dream isn't going to come true, is it? As I noted yesterday, the networks will spend tens of millions of dollars to cover minute aspects of sporting events, but they can't shell out, say, $90,000 a year to a competent geologist/earth scientist who can warn them that they have gone overboard on the hype, and to calm down.

What was the real story yesterday? There was a massive earthquake in Chile yesterday, an 8.8 magnitude monster that was the fifth biggest tremor in recorded (i.e. on a seismometer) history. It produced a tsunami that would affect the entire Pacific Ocean basin. The coverage of the earthquake itself earns the news networks a C+, because they apparently still remember some of the science they learned six weeks ago in Haiti.

But...their coverage of the effects of the quake on the Pacific Basin and Hawaii? An F. Not even a gentleman's F+. They've done grievous damage to the entire concept of responsible journalism. They hated that the Indonesian tsunami struck without warning so that they couldn't plan for their coverage of a tragic human event. So this quake hits, and they have a half day's warning to prepare for the event in Hawaii. They were so incompetent that they could position stationary cameras in what seemed to be only three locations (including what seemed hours of pictures of one moronic surfer), and then breathlessly babbled for hours about the approaching maelstrom. The tsunami arrived, and they didn't recognize it happening in front of them. Then they acted disappointed that it wasn't the disaster they had been building up for hours. And they cut to commercials. This, of course, is what I was raging about yesterday.

The story they missed? A giant earthquake produced what could very well have been a colossal tsunami. The civil defense apparatus of the state of Hawaii gears up for the event, sounding the warning sirens hours ahead of the arrival of the tsunami surge, and doing an incredible job of warning the population of what could be coming. The people of Hawaii do the right thing, stocking up on emergency supplies and taking shelter in the appropriate locations. The evacuations run smoothly, from what little I hear, and if a monster tsunami had hit, the death toll would have been very low. The tsunami hits with an intensity at the lower end of the predictions, and a number of fascinating phenomena take place (and I am still waiting for some decent coverage of what actually happened). There was a collective sigh of relief, and life returns to normal, after a brief interruption and a little inconvenience. That was the real story, and it was for the most part untold.

The damage they have done? By building up the story to a fever pitch, they could have caused unnecessary panic and worry, and when they expressed their disappointment (in their attitude, if not their words) at the outcome, they set up a situation in the future where people might not take tsunami warnings seriously. They have turned this into a "Peter cries Wolf" story in which the civil defense people actually seem to be apologizing for overestimating the size of the waves (and please follow and read the link). The Pacific Tsunami Warning Center has nothing to apologize for; they acted appropriately for the situation, and the population responded well. I can only pray that in future events they will also respond correctly.
My friend at Phreatic Ramblings captures a particularly inane conversation that took place yesterday. I normally like Rick Sanchez if he is talking about politics, but he didn't do so well here.
UPDATE: Sorry Rick, but your cartography ain't so good either (Thanks, Rebecca)
Posted by Garry Hayes at 10:15 AM

I agree! Did you see this: http://wonkette.com/413950/cnns-rick-sanchez-is-first-cartographer-to-accurately-locate-hawaii

I got the best info from you. Are you looking for a job in television?

Oh dear, no! I have no screen presence, and am not really qualified (although I would be a darn sight better than any of them have now, apparently). I just wish they valued their science analysis as much as they value their sports analysis. The world would be better for it.