Searching for the "Wow Factor" - Part 4 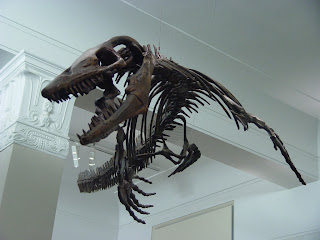 For the 4th and final post for this little mini-series, the pipe-dream of how we can make our new Community Science Center into the focus of a renewal of science education in our college district, I offer my favorite idea.
Once again, I point out that during the age of the dinosaurs that everyone always goes ga-ga about, there were a lot of other really interesting creatures, and some were every bit of ferocious as the wimpy little velociraptors of "Jurassic Park", and as big as a T-Rex. The sediments of the Great Valley Group exposed in the eastern foothills of the Coast Ranges have revealed a diverse marine ecosystem, and I have saved the best for last...
The same kid who found the first dinosaur, Al Bennison, became a paleontologist in later life. One of his discoveries in the Diablo Range was a new species of Mosasaur (Plotosaurus bennisoni), a sort of late Cretaceous sea-going lizard that has been likened to a T-Rex of the seas (Sorry, Charlie). These creatures were nearly 40 feet long, and some had jaws 4-5 feet in length with huge sharp teeth. What could be better than one of these hanging from the ceiling of the atrium? 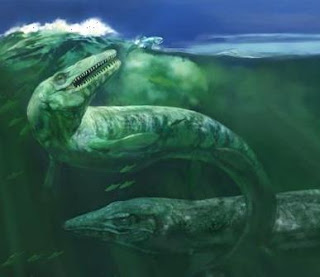 The first photo is a skeleton I saw on display in the Auckland Museum of Natural History in New Zealand...the painting is from TaylorMadeFossils, who sells a 36 foot long replica for $39,000 assemblied, and $21,000 unassembled (how hard could it be??).
Posted by Garry Hayes at 8:16 PM

How does the skeleton of a Mosasaur compare with that of a large, sea-going salt water crocodile?

I have often described the mosasaur to my students as a sort of croc with fins, but there appear to be very significant differences. The mosasaurs are descended from species of varanoid (no, I don't really know what those were) lizards, and their skeletons mostly reflect that heritage, but with legs modified into fins and eel-like tails. In terms of their eco-niche, they seem to have replaced the recently extinct ichthyosaurs in Cretaceous time. A GREAT resource on the California dinosaurs and Mesozoic reptiles is Richard Hilton's "Dinosaurs and Other Mesozoic Reptiles of California", published by the University of California; certainly, I'm no expert, and most of my info comes from his book.

Varanids: monitors and the like. Takes only a minute to learn something....