Searching for the "Wow Factor" - Part 3 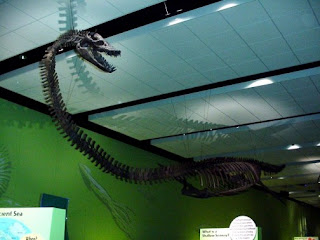 Continuing the string of thought concerning how we might produce "shock and awe" among the visitors to our new museum, there is another idea. Dinosaurs are almost out of fashion, in a sense, since it has been quite a few years since Speilberg made a sequel of "Jurassic Park". And...we have a host of really cool ocean-going reptiles that were as ferocious or scary as any little ole' raptor. The sediments of the Great Valley Group have yielded numerous specimens of of Plesiosaurs, which I could imagine as suspended above the main floor of the atrium. The example for sale here by Triebold Paleontology (for, um, $70,000) is 42 feet long.