The massive steel airlock swung open, revealing a long dark passageway. We cautiously stepped into the darkness. The swift change from dry desert air into the damp interior of the cave came as a shock. The thermometer read 78 degrees, but it felt 15 degrees hotter. Sweat began to trickle down my back. It was an uncomfortable moment, but it quickly passed as I began to see the wonders that lay within. Due to the generosity of our colleagues in the Southwest Section, I was attending a special tour of Kartchner Caverns in the desert of southern Arizona near Tucson. It was a unique and strange experience.
(Note: I would LOVE to show you the many spectacular pictures I took while in the cave, but we all had to sign a promise that we would not disseminate our pictures; I'm keeping that promise, but I hope they don't mind if I show the OUTSIDE of the cave. That picture follows) 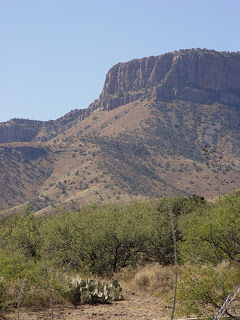 The caverns were discovered in the 1970’s, but their existence was kept a highly-guarded secret, so that they would not suffer the kind of vandalism and damage that is the fate of so many other caverns throughout the world. Following intense negotiations, the Arizona state legislature approved the formation of a state park without exactly knowing what it was that they were protecting. The philosophy that guides the park is that the caverns should be maintained in as close to their pristine original condition as is possible, while allowing visitors to see the spectacular features inside. To accomplish this, airlocks were installed to maintain the near 100% humidity (difficult in the desert environment), and trails were constructed carefully to protect the incredibly delicate cave formations. It is quickly evident that apart from the constructed walkways, human feet have never touched most of the cave surfaces. In short, a visit to the cavern is not so much a spelunking expedition, but rather a museum tour.

I don’t want that to sound like a negative observation. Few of us will ever have the opportunity to see a more pristine cavern in our lives, and few in the world are as nicely decorated as Kartchner, with all manner of helectites, soda straws, shields, and other rarely seen and easily destroyed features. Wandering through the passageways, I could sense what it must been like to discover a new cavern, and in doing that, I had just mentally checked off another of the items on my own geologist’s life list.
The life list? Many of you may remember an excellent article in the April 1990 issue of Geotimes by Lisa Rossbacher about the places in the world that all geologists should try to see in their lifetimes (A modified version of the list can be found at http://www.uc.edu/geology/geologylist/). Though not explicitly stated, it was also an acknowledgement that our life experiences can have a powerful influence on our teaching success. I hate to say it, but I used to speak somewhat blandly in my classes about Hawaii and hot spot volcanism until I had the experience of standing in front of an advancing basalt flow near Pu’u ’O’o a few years ago. Today I get excited telling others of the experience. I found and held fossils of the Burgess Shale fauna, as related in my last note. My historical geology classes are being transformed as a result. But lately I have started to feel a sense of urgency. The years are rolling by and there are too many places on my list that I haven’t been to yet. Committee work and curriculum planning chews up a lot of the hours of our lives, and though these things are important in their own way, I’m left feeling afraid that we might be getting behind in what really counts in our own lives as teachers and scientists.
But what’s even more profound, and more important in the long run, is that we are the portals through which our students are going to start their own geological journeys. Even if we can’t always take them directly, we transport them to these unexplored places with our pictures, our words, and our enthusiasm. Their view of the geological world begins with your experience. Are you behind on your own life list? How are you going to catch up?
Posted by Garry Hayes at 10:27 PM

I have a problem with this idea of public ownership denying public access. I understand the importance of preservation but by making it only accessible to a select elite AND denying the right to disseminate photos seems to be going overboard.