Searching for the "Wow Factor" - Part 2 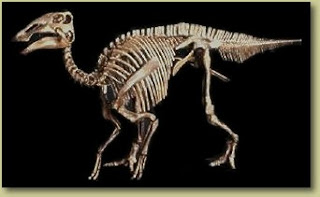 The next level of the "Wow Factor" (see part 1) regards our district's special place as the first place in California where a dinosaur was discovered. Del Puerto Canyon drains the eastern slope of the Diablo Range above the town of Patterson in our community college district. Back in the 1930's, a young man from Patterson, Al Bennison, found bones on a hillside up the canyon. Eventually excavated and prepared at UC Berkeley, the partially complete skeleton proved to be a species of hadrosaur, Saurolophus. Finding such a creature has to be regarded as slightly unusual, as California lay mostly below sea level at the time. It was probably a carcass that floated out to sea after being caught in a flood.

So what could be better than to have an example of our great heritage on display in the atrium of our new Community Science Center? Very few people in our region even know that dinosaurs have been found in California, much less in our own backyard. I have borrowed (stolen) the image above from the Black Hill Institute, in the hopes that they will realize that we would be a potential customer for their $45,000 replica of a 14-foot long specimen of a juvenile Edmontosaurus, and that as such, I am giving them a bit of free advertising...
Posted by Garry Hayes at 4:12 PM