Picture of the Day: The Airliner Chronicles, Part 3 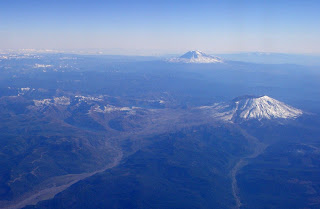 From the air, the scale of the eruption of Mount St. Helens is clear. Even after 25 years, much of the landscape north of the volcano is barren. Spirit Lake can be discerned to the left of the beheaded volcano in the center of the photo. Coldwater Lake (to the left, and forward of Spirit Lake) formed from the damming effect of the debris avalanche and ash flow down the Toutle River valley. You wouldn't know it from the near total lack of interest in the media, but St. Helens has been in continual eruption since 2004, and a new dome has grown, which towers above the older 1986 dome. Remote Mt. Adams rises in the far distance.
This photo was snapped during a flight to Seattle from San Francisco on an extraordinarily clear November day, and our route took us past all of the major Cascades volcanoes. My attempt to get pictures of all the major peaks was nearly successful, except that we apparently flew directly over Crater Lake, and I was briefly disoriented at first and missed Shasta and Lassen at the south end of the range.
Posted by Garry Hayes at 5:17 PM