Picture of the Day - The Airliner Chronicles Part 7 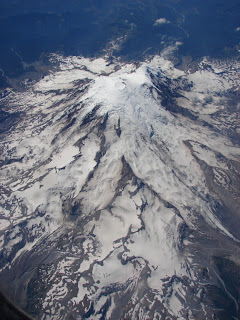 Our final entry in the Cascades Volcanoes series comes from the summer of 2007, on a flight home from Switzerland. A flight on an airline that shall remain nameless because of lousy service, uncomfortable seats, and no gps, except for a few moments between bad movies, projected on a big screen instead of seatback monitors (but think of the United States without the word "states"). But at least they didn't complain about our little geologist's conclave near the rear of the plane when we flew over the Cascades. Here is one of my favorites, an almost vertical look at Mt. Rainier, in full daylight this time. The summit crater is clearly visible, and dozens of glaciers. Coming up next: the icy realms