Picture of the Day - The Airliner Chronicles Part 2 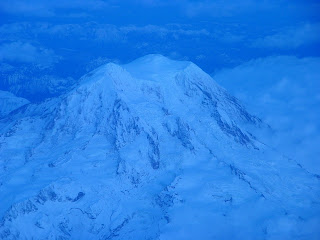 Some obvious choices come first...volcanoes are spectacular from above. I had an extraordinary flight to and from Seattle, when the skies were clear and cloudless, and the route took us alongside nearly all of the Cascades volcanoes (those pictures are forthcoming). The return flight, which started after sunset, did not seem to offer many possibilities for photography, but the long twilight caused Mt. Rainier to shine with a blue glow that was ghostly and hypnotic. Rainier is the tallest Cascade volcano, and has the longest glaciers in the lower 48 states. It is not considered to be much of a risk for explosive eruptions, but even a small non-explosive eruption could produce massive lahars (volcanic mudflows), as melting glacial ice mixes with ash and debris. Several large urban areas at the south end of Puget Sound are at risk.
Posted by Garry Hayes at 8:46 PM

That same flight path in 1970. A large moon provided illumination in my image. No photo. Just memory.
Completed basic training earlier in the day. Off to Minnesota, then later, SE Asia.
Awesome writing and photography here. Thank you.