What a perfect situation for photographic excellence: small dirty scratched windows, absolutely no control over the route, inclement weather conditions, and jetwash distortions. Taking pictures from a commercial airliner is an exercise in futility. And yet, who of the geologists among you has been able to resist the impulse to try to take decent pictures of the geologic phenomena below you on those long, boring flights? I had a fair number of opportunities to fly in the last seven years that I have had a digital camera, and I CANNOT RESIST the urge. The cabin stewards often give me the evil eye when I spend hours standing around the lavatories at the back of the plane where I have access to windows on both sides of the plane, and my dear wife gets irritated that I keep climbing over her to walk to the back of the plane to get another shot. And yet I have had some really neat teaching and learning moments with other passengers about what was going on below, and I have even heard the words "Really, I had no idea" from jaded airline employees. So, just to do something different, I would like to use the "Picture of the Day" format to highlight some of the really cool things I've seen from 35,000 feet over the last few years. I would love to see some of your best shots on this theme as well.

My first selection for this series is an otherwise unremarkable low-resolution shot. It is the back-story that I would like to relate. In 2001, I took my students on our first international field studies trip, to Scotland. It was, in fact, my first interoceanic flight, and I had possessed the digital camera for a grand total of one day, and before taking off, I had taken a grand total of three pictures. The flight, from San Francisco to London, was about 9 hours long. We had individual monitors and a GPS map on our seatbacks, so I knew where we were at all along the flight. The smart folks on the flight knew all about jetlag, and went to sleep. I was very keyed up, couldn't sleep, and I kept my eye on the ground throughout the entire flight (I would regret this 32 hours later when I would finally sleep again). But...the flight path took us over Greenland. I had never seen a continental glacier or ice-cap, and I was anxiously looking forward to my first look. So after 5 hours of waiting, the GPS said we had reached the western coast of Greenland, and of course, there were clouds. And not interesting clouds either. They were featureless stratiform clouds that revealed nothing of the landscape underneath. My frustration was intense. But I waited, and waited. For the next hour or so we flew over the land, seeing nothing. And finally, while everyone else slept, just as we reached the eastern coast, the clouds briefly parted, and for perhaps two minutes, I could see the end of the glacier where it was shedding chunks of ice into the Atlantic. And I snapped this picture. I use it in my classes, even though subsequent flights have revealed much greater scenery. 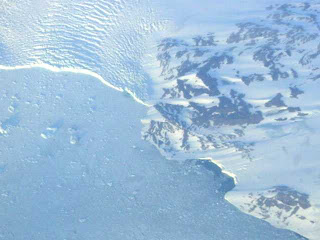 Thanks for your patience if you made it this far in my story! If you would like to see some of the other pictures of our Scotland journey, check out http://virtual.yosemite.cc.ca.us/ghayes/Scotland.htm.


I look forward to any contributions you might have to offer for this series!
Posted by Garry Hayes at 10:24 PM