New side of Mercury Exposed! 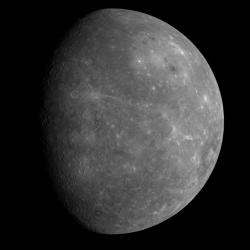 The Messenger spacecraft completed the first pass of Mercury, and the first images are being posted here: http://messenger.jhuapl.edu/gallery/sciencePhotos/image.php?gallery_id=2&image_id=117. I remember back in the days of my childhood when telescopes were really cool, but planets were a bit of a disappointment because they were just little round disks, but the Voyager and Viking missions changed everything with their spectacular close-up images of the Mars, Jupiter, Saturn and many of their fascinating moons. Mercury was the subject of a fly-by in 1974-75, but only half the surface was imaged. And TODAY we get to see part of the missing half. Check it out!