Picture of the Day - The Airliner Chronicles Part 5 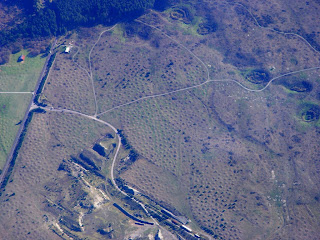 One more Cascades photo; one that mystifies me a little bit, as I am unfamiliar with the territory...I am wondering if anyone has a clear idea of the origin of the mounds? This shot was taken on the approach to SeaTac from the south. I am curious if they are mima mounds, although if they are it still doesn't answer the question of their origin, since mima mounds are sort of an enigma themselves. I am also curious if this picture has some subglacial features, channels or kettles.

I welcome some speculation or even some expertise!

Addendum a few hours later....researching my own post: the GoogleEarth site for this picture lies at 46 deg 54'52.13"N, 122 deg 50'21.84"W in Thurston County, WA. Looks like a classic mima mounds site, but has other interesting features too.
We actually have some mima mounds in our own backyard here in the Central Valley of California, although I am not sure if they share the same origin. Certainly no massive ice sheets here in the Merced/Modesto area during the Ice Ages, although some of the low foothills here include some outwash plains.