Why I Teach - The Long Journey of the Australian Marsupials 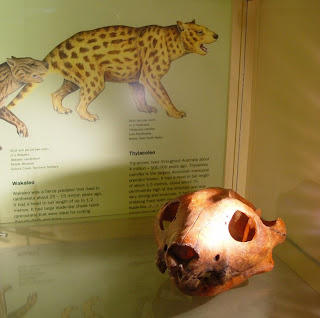 If anyone wonders why I teach at a community college, and why I don't dabble much in research, it would be because I have a scientific version of attention-deficit disorder: as soon as I start concentrating on one subject, something interesting pops up somewhere else, and I explore it for a few weeks, and then get distracted by something else. My students love it; there is almost always some weird tidbit of information that will pop up in classroom discussions. And hopefully it is a disorder that works well with running an interesting geoblog.

I was reminded of this when I saw this article in National Geographic News (Ancient Lion With "Bolt Cutter" Jaws: Best Killer Ever?) about the Australian marsupial version of a lion(Thylacoleo carnifex). Apparently, the creature had one of the strongest bites of any carnivore, and those cuddly kangaroos once had a most fearsome predator in their midst. In fact, they had more than just one.

Generally, when students are presented with the biographical evidence for plate tectonics and continental drift, it involves a discussion of mammal-like reptiles, and the distribution of the glossopteris flora across the southern hemisphere. This makes sense, given the role they played in Alfred Wegener's fight to have continental drift accepted as a plausible scientific hypothesis.

On the other hand, the story of the marsupials is a fascinating tale of journeys across vast continents, incredible adventures in successful adaptation, and horrific tragedies of extinction in unlikely places and times, as well as the on-going extinction event that is seeing the probable disappearance of koalas, tasmanian devils, and others. After a discussion of which continent has been isolated the longest, most students guess Australia, on the basis that the continent hosts the most unique mammal ecosystem, the marsupials. I am then able to point out that the ecosystem was once much richer. For nearly every animal filling an environmental niche in the more familiar climes of Europe and North America, there was an equivalent creature in Australia. For the antelope and deer, there are kangaroos and wallabies. For mice and rats, there are opossums and marsupial mice. For cats there are quolls. A stretch, perhaps, but for pigs, there are wombats. For foxes, we find the Tasmanian Devil. Less than a century ago there were Tasmanian wolves (hunted to extinction by 1930). In the paleontological record, we find a 3-ton marsupial buffalo or cow equivalent (diprotodon), and the subject of the linked article, the Marsupial lion, Thylacoleo carnifex. There was even a carnivorous species of kangaroo (Ekaltadema ima)!

The next obvious assumption is that marsupials originated in Australia. Why not? It makes sense that the most complex ecosystem of marsupials on earth must have arisen on the continent where they are found today. But they did not originate there, and were in fact relative late-comers to Australia.

The oldest marsupials known are reported from China, from Mesozoic time. My students immediately assume these marsupials got to Australia via the Indonesian Islands, which brings up the Wallace Line, which is a clear demarcation between many kinds of animals that exist on either side. The concept dates from the 1800's, and is in fact the work of Alfred Wallace, of evolutionary theory fame. The reason is tectonic. The continents are currently moving closer, and have been much further apart, making island-hopping essentially impossible.

Instead, the fossil records chronicles the successive arrival of later marsupials in North America, South America, Antarctica, and finally Australia. The distribution of these creatures makes no sense if the continents are stationary: they couldn't and wouldn't swim such distances. Instead, the journey of the marsupials is a fascinating line of evidence that supports the one-time existence of Pangea, Laurasia and Gondwana. And the story doesn't end there...

South America once supported a thriving marsupial ecosystem, including a marvelous example of convergent evolution in the existence of a sabertooth marsupial cat. It survived until around 4 million years ago, when the isthmus of Panama linked north and south America, allowing predators, especially the big cats, to move south, and treat South America like a giant buffet. The marsupials were decimated for the most part. On the other hand, the marsupial rat (the Virginia opossum) thrived in competition with North American placental species, and expanded its range into the United States.

It is a privilege and a joy to be a teacher. I've been thinking about this month's geoblogosphere carnival (subject, "what things make us go hmmm?"; see http://lablemminglounge.blogspot.com/2008/01/accretionary-wedge-5-and-6.html). I may end up with wondering what it is we do to destroy a student's sense of wonder about all things scientific. More to come....
Posted by Garry Hayes at 4:10 PM

i googled "wallace line" and i found your blog post. the subject of marsupial evolution is a fascinating one, particularly so since it goes back much farther than the evolutionary journey of placental mammals.

keep writing, i love it.

I also googled something. I googled "carnivorous kangaroos" and found your blog. I very much like your posts.