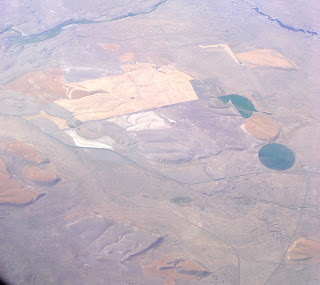 Continuing a very short series on the Channeled Scablands, this photograph shows several isolated hills and small mesas of the Palouse Soils. It is obvious given the irrigation circles that they are arable, and are well-known for their fertility. The Palouse soils are composed of a layer of loess (wind-deposited silt) that formed during the Pleistocene ice ages. During the floods caused by the glacial dam collapse in Montana (see the previous post), these low hills were islands in the midst of widespread catastrophic flooding.

I am not sure, but I think I see some of the giant ripple marks just below the center of the picture in the widest part of the channel. Normally just inches high in a river, some of the ripples on the Scablands are 30 feet (9 meters) high. Their size is related in part to the volume and velocity of the flowing water. I will try to confirm on Google-Earth when I get a chance.

I can hardly begin to imagine what it would have been like to witness one of these floods...I live on a massive floodplain, and we had an estimated 250-year flood in 1997, and as terrifying as it was, it didn't even come close to a small fraction of a percent of the volume of water on the Scablands. Imagine if you can a flood that equaled the flow of all the rivers in the world...times 10. In some places the water was hundreds of feet deep, even more in narrow canyons, and backflow alone flooded practically the entire Willamette River Valley in Oregon. Giganitic chunks of glacial ice floated along in the flood, leaving huge dropstones here and there.
Posted by Garry Hayes at 1:40 AM