How strange is that? The quake, which struck this morning, had a magnitude of 6.0, and caused some rather extensive damage in the historic downtown district of the town of Wells. Something like 25 building facades were damaged, and 3 people suffered minor injuries. The quake is a surprise if you consider the history for the region. Out of nearly 76,000 recorded quakes through 1992, there are barely any recorded in the northeastern part of the state. Although the mountains there resulted from basin and range style normal faulting, most of the action occurs at the margins, along the Sierra Nevada, and in a zone extending from Winnemucca into California. I noticed a lack of aftershock activity at first; I wonder if it is because of sparse seismometer coverage in the region.

I offer best wishes for a quick recovery and rebuilding for those in the affected region. It is one of my favorite parts of the world as far as geology is concerned. The picture below is from our 2006 Pacific Northwest field trip, showing the Ruby Range just south of Wells, and not far from the epicenter of the quake. It was considered for inclusion into Great Basin National Park in the 1980's. 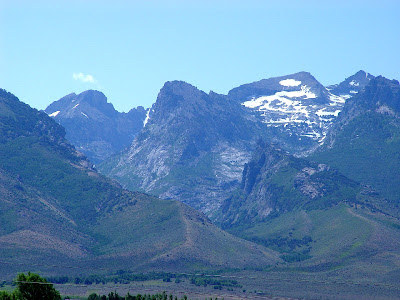 I found the GPS study that I had heard discussed at GSA: Science 1999. The survey was done along US 50 rather than along I-80, but there's a step in the GPS data near the longitude of today's earthquake.

I will be curious what the modelers see in the data.

I guess it's good to remember that the entire Basin and Range of Nevada and Utah is geologically active. Besides the obvious Fairview Peak "earthquake fault" along Highway 50, another good fault scarp is the Crescent Valley scarp southeast of Battle Mountain and more or less north of Cortez. Although the most recent movement on that fault is suspected to be about 2.8 ka, that is quite recent considering the 17 m.y. history of the faulting in the region.

Didn't feel a thing, though.

I was a grad student at the University of Nevada, and I fondly remember flying early in the morning back in 1985 with Burt Slemmons investigating for recent scarps in the mountains near Elko, and there were some young-looking scarps in the region. But it is striking the almost complete lack of historical seismicity in the entire region of northeastern Nevada.

Hey - I know Burt Slemmons from way back! His Mineralogy/Petrology labs paid my way thru grad school. He was just leaving his feldspars for recent faulting back then (mid-late 70s). I haven't seen him for a number of years, but always think of him fondly. -- And you're right, eastern Nevada is different. It's always seemed surprising to me that there aren't more earthquakes, and large ones, in the B&R.