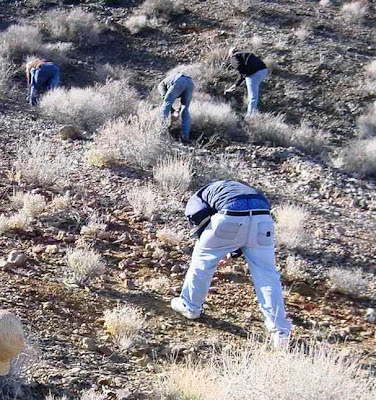 Lounge of the Lab Lemming is the host of this month's The Accretionary Wedge carnival, and the topic of the moment is (geological) things that make me go "hmmm?". I've been mulling this one over for days on end, and although I can think of a number of geological phenomena that are mysterious and intriguing, it turns out that the thing that makes me go "hmmm?" is this: Why don't more people go "hmmm?" How and when do children lose their sense of wonder and become jaded and cynical grown-ups who are willfully ignorant about all things scientific and geological? When do volcanoes and dinosaurs and planets become unworthy of attention?

I teach at a community college, and I encounter students from a great diversity of backgrounds, and almost without fail, they wait until the last semester to take a science course because they are afraid that the class will be "hard" and "boring". Andy they almost always say "I'm just not a science person". Their image of scientists is worse; they are white old men in lab coats (and no, I never wear a lab coat; and I'm only sort of old and white). It has literally become my mission to try and shake them out of these stereotypes; the first week of class is a celebration of how lucky we are to be living in these times when we have access to more knowledge than any other humans who have ever lived. We are seeing pictures of planetary surfaces that no one has ever seen before. We are discovering new species of dinosaurs and other weird strange creatures every day, and the roster of newly discovered living species continually surprises us.

It seems like every child goes nuts at some point over dinosaurs at the very least, but kids just hunger for information about volcanoes and crystals and earthquakes. But somewhere, I think just past 5th or 6th grade, that sense of wonder disappears. It takes a lot of work to bring it back. I have to literally drag some of them into the wilds, and in a few precious instances, that spark returns and after a few minutes they are crawling and searching for an elusive trilobite. They have forgotten for a few moments that they are grown-ups and all past getting excited about seeing a fossil on the ground, a fossil that no human has ever before seen until that moment. And the moment of discovery is something that stays with them for a long time.

So why do the kids lose interest? Is it hormones? Is it the peer pressure? I don't know. But I do know that one of the greatest benefits of teaching is that I am somehow involved in getting that sense of wonder back; it's not what I do, it is the earth itself that fascinates.

Update: not only do people willfully ignore the wonders of geology, they actively search out fringe ideas and conspiracy "theories", and are depressingly open to "believing" just about anything. Check out Expanding Earth and the Conspiracy of Science at Dynamic Earth (http://dynamic-earth.blogspot.com/) for a great example and discussion.

Update #2: Oh, and also I go hmmm when I wonder what exactly the story was with the formation of the Grand Canyon: check out http://www.gsajournals.org/perlserv/?request=get-abstract&doi=10.1130%2FGSAT01803A.1&ct=1

Update #3: The Accretionary Wedge is now posted! Check it out at http://lablemminglounge.blogspot.com/2008/02/geohmms-accretionary-wedge-6.html
Posted by Garry Hayes at 9:28 AM

My experience suggests that an interest in science seems to be something that must survive the education system, rather than being inspired by it - and I do wonder if that's something to do with the fact that the syllabus fails to really exploit things like the almost universal youthful fascination with dinosaurs and volcanoes.

The only geology I got taught at school in the UK was a single lesson on plate tectonics shoe-horned into chemistry, of all places (I even dropped geography at 14 due to the dull and depressing focus on urban growth models).

I think that those of us who get into geology are able to really get a grasp on the huge scale of it all. Once that step is made all the rest falls into place.