So, What's Been Happening in the World? And Why is it always Florida? 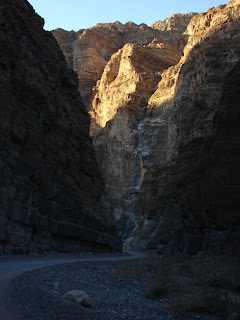 Sort of like Lois Lane in Superman II, after she had her memory wiped by the Man of Steel, I re-enter the world after five days in the wilds of Death Valley blissfully ignorant of world news (the picture above is from deep in Titus Canyon; you must see this place!). I go on the internets and find that there have been elections and primaries, $100/barrel oil prices, earthquakes, and Florida education officials thinking they are cute by linking the word "theory" with the word "evolution" (as was pointed out in Princess Bride..."You keep using that word. I do not think it means what you think it means. "). Check out some of the updates on this issue at http://www.flascience.org/wp/.

The contributors at the Panda's Thumb (http://pandasthumb.org/) have been on top of the Florida evolution controversy. On the one hand, the state education standards for the first time include the words "theory of evolution", instead of the timid "change over time". This could be considered a victory of sorts, except that as always there is a huge difference in what "theory" means to scientists, and what it means to laypeople. Evolution is indeed a theory, in that it has been confirmed by loads of evidence, it explains the origin of many diverse phenomena, and competing hypotheses have fallen by the wayside over the last century or two. On the other hand, when I ask students to use the word "theory" in a sentence, I tend to get "We don't have to believe that, it's just a theory".

You can be sure that this perception will exploited by the creation-science crowd. We have a great deal of educating to do....
Posted by Garry Hayes at 9:50 AM