Picture of the Day - The Airliner Chronicles Part 12 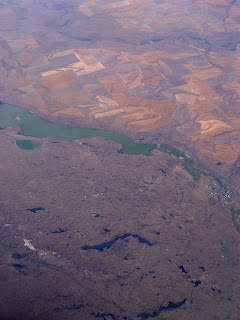 Back to some normal picture blogging; there were lots of great photo-mysteries on Friday (Geopuzzles, Friday Field Fotos 1 and 2 , Weekend fun - picture time!, and of course, the Airliner Chronicles). This photo reveals part of a very famous geological mystery that has become one of the fabled geological stories of perception, persistence, and persipiration-inducing field work.
In the 1920's, geologist and teacher J. Harlan Bertz began to wonder about the strange landscape on the Columbia Plateau between the Cascades and Idaho. Termed by Bretz the Channeled Scablands, the terrain was punctuated by intricately carved channels in the basalt, where a thick covering of loess deposits had been obviously and clearly eroded way by large rivers. There are huge potholes and giant ripplemarks, and dry waterfalls with no obvious water source. Harlan Bretz realized that the features must have resulted from cataclysmic floods involving hundreds of cubic miles of water, beyond the scale of anything ever seen in previous geological studies...anywhere. Although his conclusion is easier to visualize in satellite and aerial photos, Bretz managed to do it when such technology was unavailable. He walked the outcrops, and figured it all out from ground level.
That was only the beginning of the story. Bretz figured out that giant floods had carved the Scablands, but he knew of no sources for the vast quantities of water required to produce said floods. And in a time of geological controversy over evolution (some gentleman named Scopes) and uniformitarian philosophy aligned against catastrophism, his conclusions were fiercely contested by the geological community, who proposed various less intense processes to explain the features.
The Scablands remained a controversial issue for four decades. J.T. Pardee, working in Montana, had found a source for the floods in an immense glacial dam that blocked vast amounts of water in western Montana (Pleistocene Lake Missoula). It drained catastrophically as the inherently unstable ice dam broke up numerous times. But still, the geological community had a hard time accepting such an incredible and incomprehensible hypothesis. The evidence continued to accumulate, and with advances in remote sensing (like putting satellites in space), the reality of the ice age floods became more acceptable to the scientific community.
Harlan Bretz eventually was recognized for his tenacity in the face of vigorous opposition. In 1979, the Geological Society of America awarded him the Penrose Medal for his contributions to geology. He was 97 years old at the time (he passed away in 1981).
The photo of the day was taken on a flight home from Paris in 2006. It was the first time I had seen the Channeled Scablands from above, and they were a stunning sight.
I teach by standing on the shoulders of giants (to borrow a concept from Isaac Newton)...I am awed at the perception and insight that Bretz brought to his work, and really, to the work of all the researchers who toil in the field of geology. They have done, and continue to do things that I can only barely imagine. I enjoy telling their stories, in hopes that those in my classes will be inspired to push beyond their perceived limits and discover new and wondrous things about our little planet.

There was a man and wife, I met him while working at the USGS, Reston back in 75 -- they lobbied hard for his acceptance, and had booths about the scabland floods at GSA meetings. I don't remember their names, but somehow I think they were key in getting the story around, after Bretz had maybe given up. The man gave a talk at a local geological meeting in the D.C. area back in the 70's; that was the first time I heard about the flood, and the story of Bretz, which has always seemed poignant and important to me. I was at the meeting where he got the award - I can't remember if he accepted it himself? But many people were in tears.

Possibly someone else can add to this bit of geo-history.