A Beautiful and Precious Day: How it was today in Yosemite

OK, I'm waxing a little poetic today, but let me give you some background. Got to sleep late last night in the middle of a rainstorm, got up miserably early to see the rain continuing, and a check of the weather radar said it was still raining up in Yosemite National Park, which was the destination of our class field trip today. Drove to school during the gloom, gathered up the students into the bus, and we drove off into the rain. I've often said that Yosemite has a uniqueness that transcends bad weather, but not when I'm dragging a bunch of not-necessarily enthusiastic sleepy students.

And that's why today was precious... 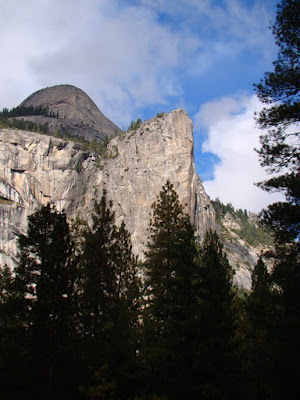 By the time we reached Yosemite Valley early in the afternoon, the clouds were breaking up, and we were witness to a stunning view of rain-washed cliffs and roaring waterfalls. In many Octobers, the valley is dry and dusty, tired after a summer onslaught of millions of tourists. Above, North Dome and Washington Column are framed by bright blue sky. North Dome is a classic example of exfoliation weathering: as the rock was exposed by erosion, it expanded outward, cracking and forming slabs that ultimately slid off. The effect was to remove corners and edges. 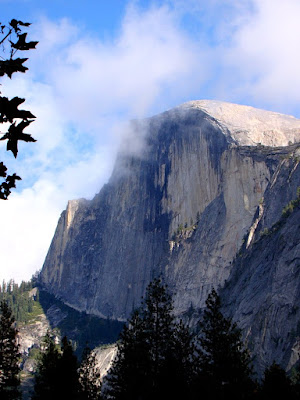 Half Dome spent much of the day with a crown of clouds, but by afternoon it joined the skyline. Half Dome would have been best named Four-Fifths Dome, but I prefer the Native American name: Tis-sa-ack. Like North Dome, Half Dome was never covered by glacial ice, but instead was shaped by exfoliation. A prominent joint on the north face was quarried by glacial ice flowing along the base. 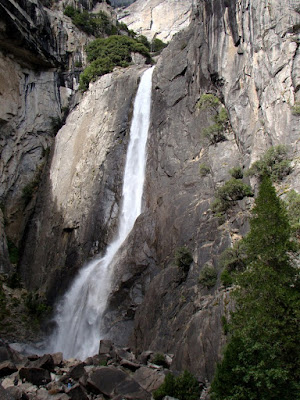 The rain this month was more than normal, and the rivers have started flowing early. Yosemite Falls looked more like early summer than the middle of fall. The falls are a classic example of a glacial hanging valley. Lower Yosemite Falls drop 318 feet almost to the valley floor. They are easily accessible by way of a short trail. Although it is not at all recommended, and people are constantly getting injured, climbing around on the falls is a common occurrence. At least they provide a sense of scale in the photo above. 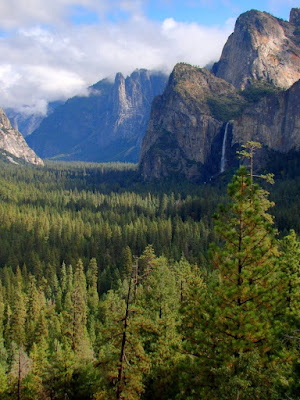 From the Wawona Tunnel exit, the view is almost always indescribable, and I can never resist taking a bunch of photos. I try to bring out different perspectives, and today Half Dome was obscured by clouds, and shadows accentuated the flatness of the valley floor. I shot a bit to the right, removing El Capitan from the picture as well. Sentinel Rock and the Cathedral Rocks become the dominant cliffs from this perspective. 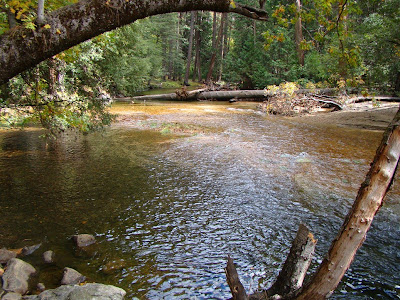 I had a chance to walk from Yosemite Falls to Happy Isles, a traverse of about 4 miles on the Valley Loop Trail. It was amazingly bereft of people, to the extent that I actually started to worry a little about mountain lions lurking atop the giant boulders that line the trail. The river crossings showed how much water was moving through the valley. Tenaya Creek (above) is usually almost dry.

My poor students, forced as they were to attend a required class field trip, dutifully took notes, and pretended to be interested. I think they had some fun while they were learning, though. For myself, I felt privileged to be in such a beautiful and stunning place...
Posted by Garry Hayes at 10:49 PM

Such an amazing place for a field trip. Those students don't know how lucky they are. Glad you ended up with such a non-rainy day. Great captures.

bad weather can be the best weather in yosemite - a thought shared with my by @yosemiteranger on twitter bob rooney. but you are right with all those students having the rain stop before you got there is a real plus. thanks for the photos and updates. i miss not being able to hop in the car on a whim and go there whenever i want (and it was usually once a week).

I love Yosemite in every season, and some of the best times have been during and after snowstorms. Fresh snow on the valley floor is indescribable. One new year's we went out at one in the morning on a night of the full moon after a fresh snow. Just stunning, and we had the whole valley to ourselves (a ranger was the only other car on the roads).

"North Dome is a classic example of exfoliation weathering: as the rock was exposed by erosion, it expanded outward, cracking and forming slabs that ultimately slid off."
Wow. I totally misunderstood exfoliation weathering - I thought it was just layers getting sloughed off. Can you recommend any good places to read more about it?

Oh, and these pictures are fantastic!

Helena, get "Geology Underfoot in Yosemite National Park" by Glazner and Stock. It has a great chapter on exfoliation and the latest ideas about it.

Great post Garry! Laura and I took a short day trip to Sentinel Dome on Sunday knowing the atmosphere would be crystal-clear after the storm. The views were stunning, but check out the peacock impression of Yosemite Falls in the photo below. "What does it mean??"
Yosemite Wonka Falls