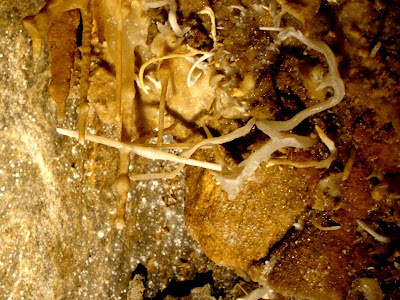 The guesses regarding the odd features in Wednesday's "Whatsit?" were all over the place, including a great story of the albino cave tarantulas, but a number of people remembered their obscure cave decorations and called them by their correct name: helictites. We were in Black Chasm Cavern near the towns of Volcano and Pine Grove in the Sierra Nevada Mother Lode. The state of California has a number of caverns offering tours, in the Sierra, the Klamath Mountains, and the Mojave Desert, but I find that Black Chasm, though small, is also one of the most spectacular. A big reason is the preponderance and variety of helictites that can be seen in the inner chamber. 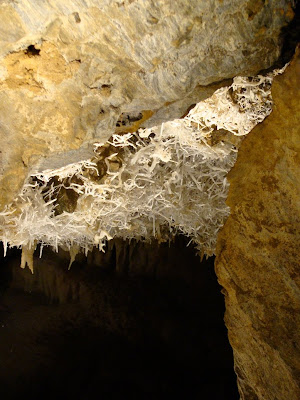 Helictites are one of the stranger cave decorations because they seem to (and indeed do) defy gravity. Stalactites and Stalagmites form as water drips from the ceiling of a cave and splashes on the floor. Stalactites grow downwards from the top while stalagmites grow upwards from the floor. They occasionally grow big enough to link up, forming a column. In a nutshell, helictites are stalactites on drugs. Their origin is not clearly understood, but is thought to be related to water pressure and capillary action which can operate in opposition to gravity. Imagine a stalactite with water dripping form the the tip, but with water being squeezed outwards to the side rather than dripping straight down. The calcium carbonate precipitates out in an uneven manner, and the helictite grows in odd directions. Cave winds have also been suggested as an origin, but many caves that have helictites do not have strong wind currents. 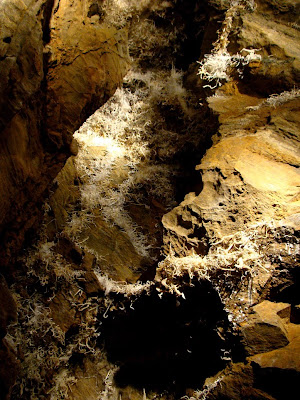 Black Chasm has been granted National Landmark status because of the beautiful helictites that cover several walls. Why are they here in such abundance? One reason is that helictites are so delicate that they rarely survive the early discovery of a cave. Cave visitors in the 1800's and early 1900's tended to take cave decorations as souvenirs, and helictites were the easiest to break off (whether on purpose, or by accident). Black Chasm was discovered in the middle 1800's, and the outer rooms suffered a lot of damage, but there was a true chasm in the cave interior that kept out casual visitors. It is nearly 100 feet deep, and required ropes and climbing skills to cross. When the cave was developed in the 1990's, a stairway was constructed that allowed easy access to the inner chamber, but the operators of the cave have done a good job of keeping vandals from the delicate decorations. 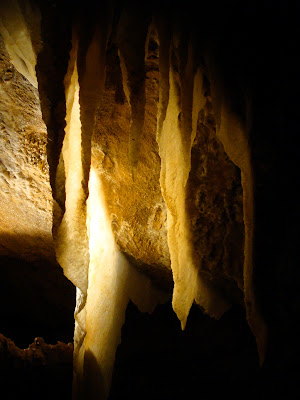 Another reason I like the cave so much is that it is strategically lit to emphasize the best of the other speleothems (cave decorations), especially some beautiful drapery formations (above). Early cave explorers used smoky torches for light and were inclined to touch and muddy most of the accessible cave features. Through heavy visitation and abuse, most tourist caves have dirt covering the speleothems. This is not the case in Black Chasm, and the operators have made the most of it, by showing the beautiful translucence of the thin filmy draperies.

Caves are fragile, irreplaceable, and worthy of our protection. I wrote about Black Chasm last year, and ended with the following:

If you are interested in exploring wild caves, preservation and protection is the highest priority. As such, you should get in touch with the local grotto of the National Speleological Society if you want to be involved in protecting this special resource. If you have followed my blog for any period of time, you will know that I think that cave vandals are one of the lowest and most moronic forms of humanity in existence.
Posted by Garry Hayes at 4:12 PM

This is a beautiful cave, so many helectites. It really is a shame so many caves have been vandalized. Is this a marble cave?

Wow, those are really fantastic helictites!
(They're my favorite formation!)

Re: caves being dirtied by tourists: even modern show caves receive inadvertent dirtying. Fuzz from clothing, bits of hair, little bits of trash, and sloughed off bits of skin all accumulate on the formations. While dirt and mud are serious concerns, this crud can also seriously discolor the formations. Luckily, it's easily removed via tweezers:
http://bit.ly/duqHUE

Thanks for pointing out this post! This will definitely be on my travel itinerary next month!