From hell's heart I stab at thee: Accretionary Wedge #28 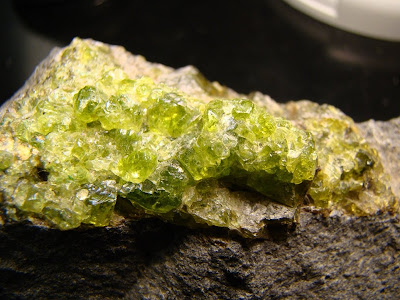 "...to the last I grapple with thee; from hell's heart I stab at thee..."
The Accretionary Wedge challenge for the month is to show off a favorite "deskcrop", those beautiful and significant rocks and minerals that have won a coveted position on the desk of a geologist/teacher. The convergence of the wedge with Halloween added a layer of complexity by asking for spooky items. Well, I have a lot of deskcrops on my desk, so many that there is precious little room for books and office supplies and that sort of thing. It was hard to choose.

That "spooky" thing made it even harder, but what is Halloween about anyway? The day was co-opted by the Christian religion from earlier Celtic traditions, but the upshot of the cultural intermingling of meanings is that on All Saint's Day Eve there are spirits from the underworld set loose on Earth. So I looked for the deskcrop that best exemplifies the underworld, and I realized it could be nothing else but the walls of hell itself: olivine dunite xenoliths from the deep mantle, brought to the surface of the Earth by volcanic eruptions. 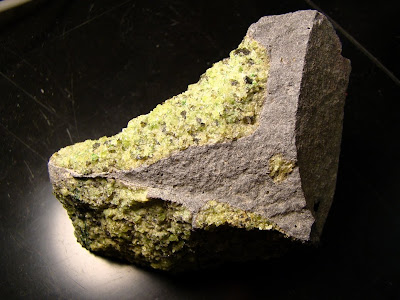 Olivine is a beautiful mineral, one of my favorites, with a glassy luster and bright green and yellow color which varies due to a substitution of iron and magnesium in the crystal structure. It is also known as the gemstone peridot, the August birthstone. The streets of Heaven are paved with gold, but the walls of hell are apparently lined with gemstones! The mineral is relatively unstable at the Earth's surface, and readily alters to serpentine when exposed to water in the upper crust.
As for the quote, it comes to us from Moby Dick by Herman Melville, although it was also a memorable quote from the movie Star Trek II: The Wrath of Khan (and I hate to admit that I first knew of it from the movie).
Thanks to Research at a Snail's Pace for hosting the Wedge this month!
Posted by Garry Hayes at 4:00 PM

Nice choice of a spooky deskcrop. Having never been to Hell I couldn't say what the place is lined with, but this will do. Especially as I'm not overly fond of the limey green color. Yet do like the deeper greened version of serpentine. I'd have a really hard time deciding which of my many desk/shelf crops to choose.